I watched Julie & Julia 365 every day for a year and blogged about it. I've earned this blogging vacation. But now that I'm on winter break, I figure now's as good a time as any to tell you about the time I was on TV for watching movies.


So as many of you know, I was flown out to Denver for the final viewing party. And as a part of that press junket, (I know! A press junket! What? I still don't know what a "junket" is!) I was briefly interviewed on FOX Denver's morning show Everyday! (an oddly fitting name for a show, given my... accomplishment) 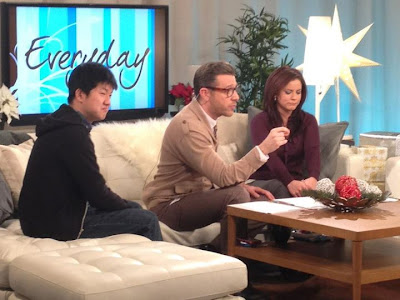 My part starts about 5:15 into this video. It was pretty fucking surreal being interviewed on live television. I won't lie--I was pretty worried that they were gonna ask me about Amy Adams and I'd just start swearing prolifically. But I think I ended up doing okay... see for yourself. 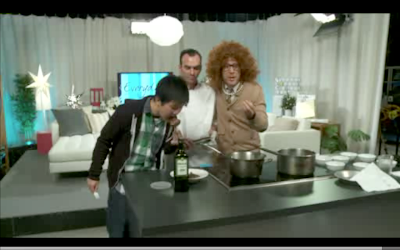 Also, here's the cooking segment they did after my interview. Chris Parente, the host, borrowed my Juila Child wig and pearls and did his own little JC impression, but I think I could give him a run for his money.

Anyway, that's all for now--I also appeared on a Denver CBS affiliate and a PBS entertainment show, but those aren't on the internet yet--watch them if you want, but I won't be offended if you've got better things to do. Just thought it'd be cool to share WHAT YOU CAN ACCOMPLISH BY WATCHING THE SAME MOVIE EVERY DAY. Check back tomorrow for:

And... by the end of the week, I plan on announcing my FOLLOW-UP BLOGGING PROJECT to the world. L/J&J was just a warm-up for this shit, people. So stick around.