A Letter From Julie Powell

Even though the Lawrence/Julie & Julia Project technically ended weeks ago, I've tried to milk every last second out of my 15 minutes of fame by extending this "celebration" period a.k.a. recapping my glorious final viewing party in Denver for all three of you readers who've stuck around. But this is it. The final final post.

It's been a pretty weird year for me to say the least. The first strange thing to happen to me was that the actual Julie Powell left a comment on my first post. And then she went away for awhile... understandably so... After all, this pretty much became primarily a Julie Powell Hate Club. But as much as I hate the she-devil (or rather, the portrayal of said she-devil in Julie & Julia), I respect her accomplishments.

So anyway, the awesome people at Denver Off-Center managed to contact the real Julie Powell to ask her about my blog and she was nice enough to give a thoughtful response. And since her year's work was pretty much the genesis of mine, I thought it'd probably be most fitting that she would get to postmortem The Lawrence/Julie & Julia Project, once and for all. 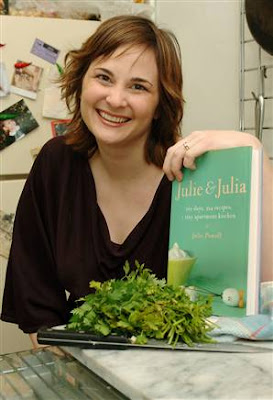 Lawrence Dai's project was brought to my attention - not by him, I might add - within the first week of its inception.  I read along for awhile, impressed by Lawrence's attention to detail (many of his early entries mirror my own nearly forgotten ones to the point of eeriness), his dedication, and most of all his sense of the meta and the random.

I will admit, after reading for awhile, I got a little soul-sick, just putting myself in Dai's shoes.  I myself have watched "Julie & Julia" 7 1/2 times, and if I ever had to watch it again, at least for another decade or so, I will probably just go ahead and stab my eyes out.  I mean, maybe "The Third Man" could withstand such abuse.  Maybe "Rashoman."  Maybe "Serenity."  But this sweet Nora Ephron movie, made from my fluffy little book?  No one could survive this.

"Surely," I thought, "SURELY he will cave on this, he will give up and get on with his life."  I hoped so, for his sake.  But he didn't.  After a while I read it only once a week, or once or twice a month.  He made a lot of funny points, a lot of sort of painfully right-on ones, and quite a few I disagreed with but found intriguing.  But still.  It hurt me.  Not because of his incredibly fair criticisms of the movie, but because witnessing sado-masochism in such an intimate and daily manner takes a lot out of a person.  Gradually I dropped out entirely, perhaps hoping that if I wasn't reading, it wasn't happening.  So imagine my shock when I heard a week ago, that not only was Lawrence Dai still watching, still blogging, but that he was at the home stretch and doing fine!  That, my friends, is strength.  It's also insanity.  But mostly it's strength.

The whole "My-year-of-whatever" trope has become the tritest cliche of blogs and blogs-to-books in the last few years, but I've always thought that what blogs really do best is chronicle obsession, and the more obscure the better.  Lawrence's dedication, his daily session of flagellation-by-rom-com, moves his project to some place beyond the usual spate of snide one-joke internet gimmicks into something else.  I am not sure what that place is, and I'm not entirely sure I want to, but it is a deep and sticky place and nutty place.  Like pie!

Chin-chin, Lawrence!  May all your dreams come true and your J&J DVD languish in some dusty corner, forever and always!

Listen, I know I was going to gracefully bow out and let Julie Powell have the last words, but I have to interject. ONLY 7 1/2 TIMES?!!? POOR YOU, JULIE POWELL. POOR YOU.

Seriously though, it's very cool that Julie Powell sent that letter. And she was super complimentary and supporting of the whole thing... I think...

Anyway, though this is my official goodbye to Lawrence/Julie & Julia, I won't be leaving the blogosphere entirely. In fact, you'll soon be able to find some Lawrence Dai-generated content at typesofbabies.tumblr.com. Follow me if you wish. I know, I know--a tumblr, what? Have I sold out? Yeah, probably. And Types of Babies? What is that all about? You'll see. Soon enough. Probably sometime in January.