I really don't think we're going to get through commenting Nora Ephron's director's commentary by the time this blog finishes out. Which is weird, considering all the high-quality content I've been churning out lately... I mean, theoretically I could buckle down and watch the director's commentary every day for the next week. But who would do that? That's crazy. Anyways, here's part 8. Parts one, two, three, four, five, six and seven for reference. 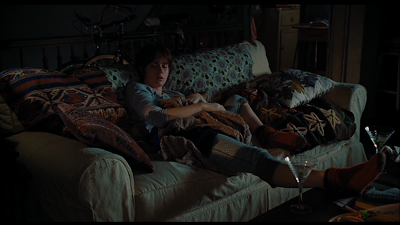 I absolutely hate it when people burn things in movies. I’m always seeing movies where things get burned and it just makes me nuts—its seems like such a sort of silly trick, but when you’re basing something on things that actually happened it becomes a lot easier to do because Julie Powell did in fact… burn the first batch… of beef stew… that she made.

Is burning things a common movie trope or something? I mean, I guess I have seen movies where the main character burns something, but I can't really think of any off the top of my head. Am I watching the right movies? I saw that movie "Burn After Reading," but I don't think anyone actually burned anything during it. I can just imagine Nora Ephron sitting in a nursing home watching X-Men on cable and getting all riled up anytime Pyro shoots fire out of his hands: "What?! This again!?! I hate it when shit like this happens in these fucking movie pict-chas!" 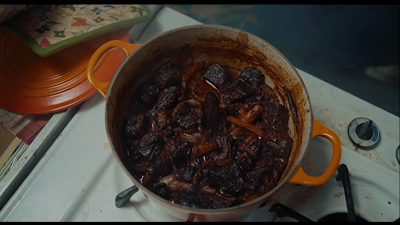 And even that burnt stew looks pretty good. That’s how good boeuf bourguignon is. I could eat that.

You could also die of ingesting too many carcinogens. The choice is yours. 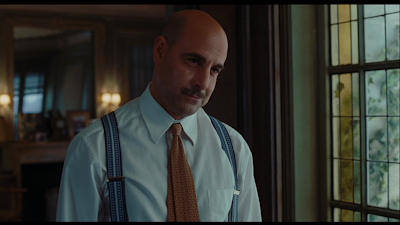 Paul Child was an absolutely wonderful photographer, some of his photographs are in the Museum of Modern Art and he was also a wonderful painter, but he was not really… a success, in the state department. And… when I did the movie… I gave all the actors the lyrics to that Bruce Springsteen song… about marriage which has this great lyric, “If I fall behind, wait for me.”

I've got a better, more applicable Springsteen lyric for my current situation: "I don't give a damn for the same old played out scenes." 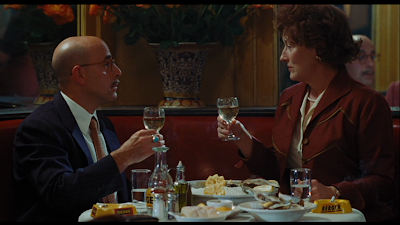 And this to me, is the beginning of such an interesting part of the Child marriage because… because he really went through a rough period… with her and she… found a way to involve him in what she was doing, began to take the photographs of her cooking which became the basis of the illustrations in the book and… they, they had a wonderful marriage—she supported him when he was up, he supported her when she began to do this… and, and they really got each other through some tough, tough things. 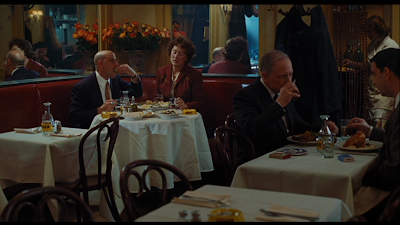 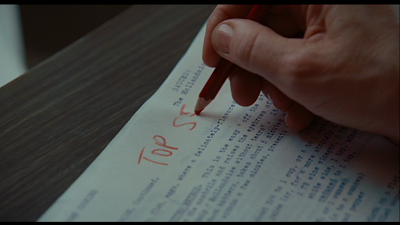 This is an exact copy of the recipe that Julia sent to her great friend Avis DeVoto in, Cambridge. Avis became Julia’s great supporter in… in the United States and… was instrumental in getting her book published, as you will see.

What exactly is an "exact" copy, anyways? Aren't all copies supposed to be exact? I mean, you are pretty much just duplicating the original, right? Do "vague" copies exist? 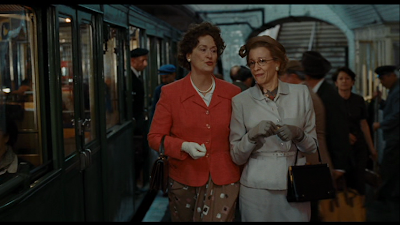 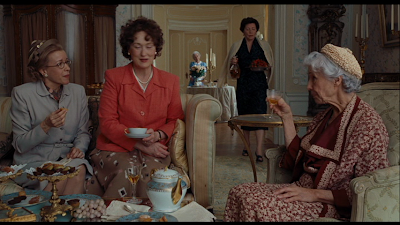 And of course this is… Frances Sternhagen, one of my favorite actresses playing the most famous American cookbook author up until then, Irma Rombauer, the author of "The Joy of Cooking," the book that everyone had and really, many people still use and it’s a great cookbook. 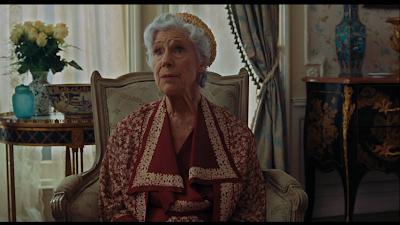 This is kind of the story of… of her life boiled down into 34 seconds.

So you can boil the story of Irma Rombauer down to 34 seconds, yet you choose to waste 349 hours of my life on documenting the life of the insufferable Julie Powell? Yeesh, Nora. Get your priorities straight.

And it is absolute true that Julia met her idol… and discovered, that her idol mostly wanted to talk about the nightmares she had had getting published and dealing with her publisher whom she then sued and was in court with for years and years and years. It was a bitter, bitter lawsuit.

"It was a bitter, bitter lawsuit that was in court for years and years and years..." = The opening lines of Irma Rombauer's unsuccessful children's book, "The Misery of Life." 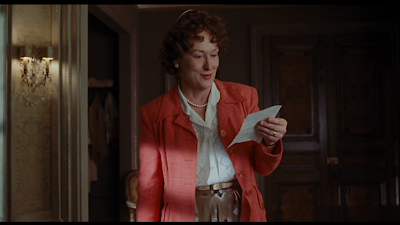 And finally, $250 was a perfectly acceptable, advance at that time for a person who’d never published a book. It's funny and its plays as a joke but, but in fact it isn’t that they tried to rip her off in any way.

It's not really that funny. It's more of a--oh, okay, this movie is taking me completely out of the narrative by making me painfully aware of the fact that it's a "period piece" by clumsily inserting a monetary value of the 1950s that would seem somewhat low without having adjusted for inflation today. 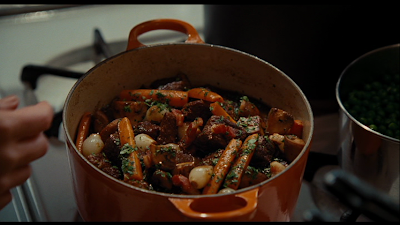 Once again we cook boeuf bourguignon, bawf bourgignon, boof bourg—I have no idea how you say it. Isn’t that gorgeous?

See? No one knows how to pronounce it! 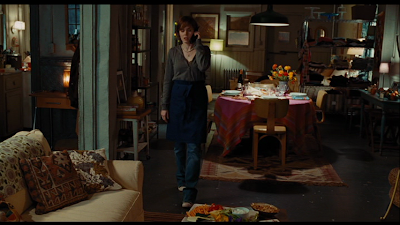 As I say, I’ve never known for sure whether… that Christian Science reporter had actually… spoken to Judith Jones, before he said that he wanted to bring her to dinner. And… there’s no question that Julie Powell thought that the reason… Judith Jones didn’t come to dinner was because of the rain and… because of Judith Jones’ advancing years, but Judith Jones is a very spry with-it person in her eighties and I think, I think she just didn’t want to go to dinner with Julie Powell.

I can't imagine why some one wouldn't want to go to dinner with Julie Powell.

Julie & Julia Quote of the Day: "Can you grab the plates too?"
Posted by Lawrence Dai at 10:09 PM