In lieu of a traditional Random Actor Tuesday, I thought it'd be sort of interesting to examine a sort of phenomenon that's been happening since I started profiling random actors in Julie & Julia. Well, I guess it's not really a phenomenon--it's more of a "People who know the random actors in question are calling me out on being a douche internet bully" kind of thing. 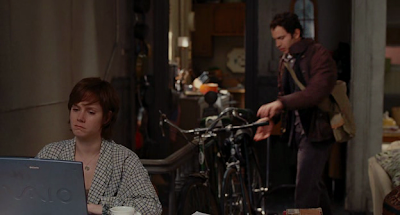 Most recently, many have lept to the defense of Tom Stratford a.k.a. "Gangster" and Helen Coxe a.k.a. "Schnozzerella."

In Tom's profile, I made a big deal of how he lists himself as having played the role of "Gangster" in Julie & Julia, even though nothing in the scene indicated that he was affiliated with any gangs. 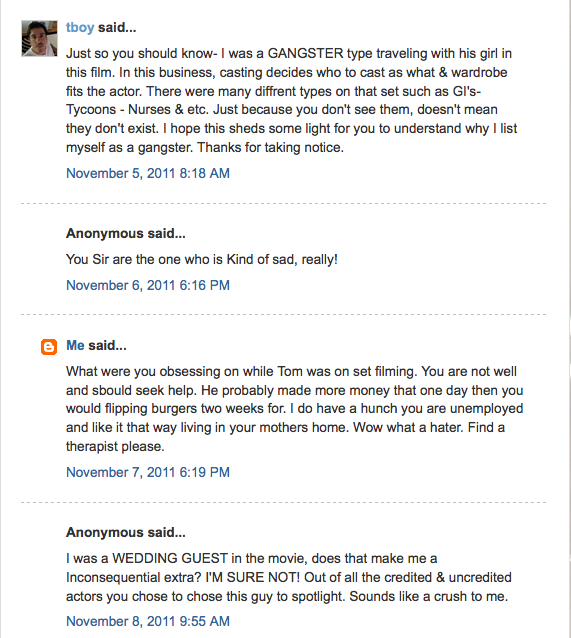 I'm led to believe that the first comment is from the actual Tom Stratford, which is awesome! Another instance of a real-life Random Actor Tuesday contacting me! He shines some well-needed light on the casting process and was a real class act about it. He seems nice. But then I received a string of defensive comments from what I'm sure are his colleagues and friends (given the timing of the comments in relation to when it was posted).

And then there was Helen Coxe, our favorite big-nosed random actress. 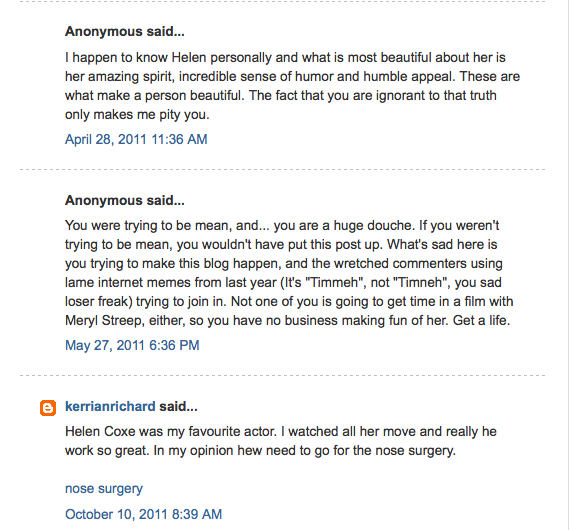 Helen Coxe sounds like a wonderful person! And I never questioned her character--I just made fun of her in a low-brow, incredibly superficial and shallow way. I know my mean-spirited post about her nose was mean-spirited and I honestly do feel bad about it, but when I get angry emails telling me to take the post down, I choose to stand by my douchey words.

But why? Why do I insist on picking on them? What's my problem? Am I just a dick?

Yeah, that just about sums it up.

I'll be the first to admit that I have been a big internet bully on some of these RAT posts. And I probably deserve all the hateful words directed towards me. But it's just fascinating to me to think that a bunch of people have been reading these posts out of context and assuming that I am just this fucking douche who hates actors who are trying to make it.

In fact, I love small-time actors! They give me stuff to write about every Tuesday! Sure, I get up here and pretend to stand up on this pedestal and make fun of their occupations--but this is all born out of an intense jealousy, for I am a inconsequential internet blogger.

I mean, I hate that, but it's what I am and I have to live with it. People on the internet like to read mean-spirited things and me, being the pageview-whore that I am, write what I write in an attempt to entertain these people. I realize that some things I say might be hurtful, but at the end of the day, I am just some fuckhead on the internet. I have no say in casting decisions! I have no say in anything, really. I am literally, nothing!

I have never been, and will probably never be in a movie--and I couldn't even fathom being in a major Hollywood feature film like Julie & Juila. I envy these people! They've followed their dreams, no matter the cost and I have the utmost respect for them. Hell, I wish I could put myself out there like that. 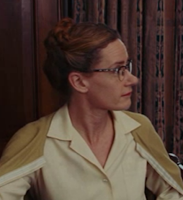 Today, I salute Tom Stratford and Helen Coxe. I was wrong to have bullied you and I apologize for any hurt feelings along the way. Actors like you are an inspiration to us all, truthfully--keep doing what you're doing and pay no heed to the snarky internet stunt bloggers of this world, for we are the absolute worst of humanity. And I mean that.

Julie & Julia Quote of the Day: "But you can always put it together."
Posted by Lawrence Dai at 11:59 PM