Day 317 - Julie Powell Has Something to Say

Hey everyone. So normally, I would try to identify some flaws/point out some weird or funny thing in Julie & Julia--but it's been brought to my attention (thanks to readers Emma G. and Daniela P.) that the real Julie Powell recently wrote a J&J-related piece in the New Yorker about the recent release of "Mastering the Art of French Cooking" on the iPad. 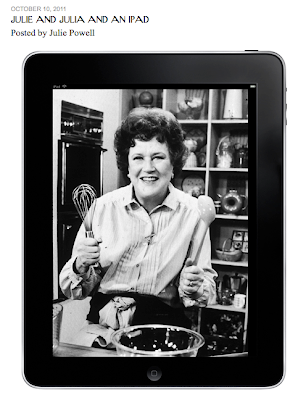 Never mind that I had already covered that very same topic here on the L/J& J Project FIVE DAYS EARLIER. Let's just see what Ms. Powell has to say, shall we?


"Since the day I brought it home, my iPad has become a fixture in the kitchen, putting helpful sites like Epicurious and food52.com at my fingertips, splashes and stains be damned.

There’s a downside, however: guilt. Specifically, the guilt I feel when I glance at a kitchen shelf piled high with the beloved cookbooks that served me so well for so long, now dusty and neglected—foremost among them “Mastering the Art of French Cooking,” the book that changed my life. I spent a year preparing every single recipe in the book. Child’s recipes taught me to cook. And her prose inspired me to become a writer."

Oh, that's nice, Julie Powell. You feel guilty about not using real cookbooks anymore--wait, why should I care about this again? Oh, that's right--because you did that one thing EIGHT YEARS AGO where you cooked a bunch of Julia Child's recipes and you've been coasting on the fame it's afforded you ever since. That's why. Let's go on, shall we?


"I was thrilled, therefore, to learn this classic cookbook has been released as an e-book, and can now be downloaded—for the rather steep price of $19.99—to your Kindle, iPad, or other tablet."

I think you mean mean, "rather Streep price." AHAHAHAHAFUNNYFUNNYFUNNY.

"It just makes so much sense. One of Child’s great innovations in “MtAoFC” was the book’s structure. Rather than listing the ingredients at the beginning of each recipe, in the conventional fashion, Child devised a two-column format that lists the ingredients and equipment you will need alongside each step of the recipe. The result is not just a guideline for making one dish, but an illumination of the core techniques required for preparing French cuisine. The book is conceived of as a comprehensive introduction to these techniques, from the basic to the baroque. When cooking the boeuf bourguignon on page 315, for instance, you are directed to pages 483 and 513 for helpful reminders on how to properly brown-braise pearl onions and sauté mushrooms, respectively."

If I wanted a lecture on how creatively formatted "Mastering the Art of French Cooking" was, I would have signed up for that class. You know the one--what's it called, oh yeah--BORE ME TO DEATH 101, taught by PROFESSOR SNOOZE.

"It’s a wonderful design, though it does make for a lot of page-flipping and corner-folding, which can be a source of stress for a frantic cook like me. Not so in the electronic version, however. Now, thanks to hyperlinks, rather than flipping between three or four different pages to keep track of one complicated recipe (like, say, the braised goose with chestnut and sausage stuffing), I can be off to the marrons braises and back again with the touch of a hastily de-greased finger."

Now thanks to guns, I can shoot myself before I have to finish reading this article.

"I do have a few quibbles with the new format. The iPad’s small screen can make long recipes seem even longer. I wish the index had a feature that allowed you to skip down to, say, the “p”s (pot au feu, anyone?) without scrolling laboriously page by page. Even since downloading the electronic version, I’ve found myself reaching for my faithful hardcover, where I can locate my favorite recipes more easily."

Is this is a legitimate thing? Reviewing an ebook of a book that's been out since 1961? Do we re-review every Beatles album every time it comes out on some kind of new re-mastered format? Oh, wait, maybe we do. Still, who actually gives a shit about this? Who is actually concerned about what Julie Powell thinks about a cookbook coming out on the iPad? Don't we have better things to do?


"And something intangible has been lost in the translation to the e-book format. As I picked up my old, foxed, broken-spined copy of “Mastering the Art of French Cooking” to compare it to what was I seeing on my iPad screen, the book fell open, as it so often has before, to bifteck sauté bercy. I’m not certain why this recipe for steak in a white wine, shallot, and bone-marrow sauce is where my copy of “MtAoFC” naturally opens to; certainly I have made other recipes more often. But it feels right. For one thing, this page marks my first kitchen encounter with beef marrow, which was … an adventure. The page is also marked by a large, vivid, purple stain. I don’t remember exactly how that stain got there, but I have a pretty good guess, and while it has nothing to do with a tranquil culinary experience, it has everything to do with what this book means to me."

I'm all for shameless self-promotion, but gaaaawwdddd. I GET IT. THIS WAS A THING THAT WAS IMPORTANT TO YOU AT SOME POINT. BUT THAT POINT WAS 8 YEARS AGO. FIND A NEW HOBBY/CLAIM TO FAME. IF I'M STILL TALKING ABOUT JULIE & JULIA IN 8 YEARS, I DESERVE TO BE FUCKED IN THE FACE. BY A BOAR. WITH RABIES.

"I’m no paper purist—I love having all five “Game of Thrones” novels at my fingertips at all times—and the conveniences of the iPad will surely keep many of my cookbooks moldering on their shelf. But certain books need their weightiness, their awkwardness, to take on their full meaning. “MtAoFC” on the iPad is more practical, but it’s far less personal."

Taken from "Julie and Julia and an iPad"

In all honestly, this article actually isn't that horrendous. And I'm sure a bunch of old Julie/Julia Project fans were dying to know what their cult leader had to say on the topic of cookbooks coming out in electronic formats. And if The New Yorker asked Julie Powell for her take on it, then I don't blame her for giving it--it's the fucking New Yorker for christssakes. It just--I don't know--bums me out a little.

Believe it or not, I hate the real Julie Powell mostly because I envy her success. She's a good writer and she has a huge following online. But this kind of thing just makes me sort of feel bad for her--like, she's just the de facto expert on how to read Julia Child recipes and nothing else. That's all she has. And she's milking it hard. Which I don't blame her for necessarily, because I know the feeling. This is all I have too, Julie Powell. A completely derivative and ultimately trivial internet blog.

But wait, what am I saying? Get the fuck over yourself, Julie Powell. Do something new. Something exciting. Something that can't be adapted into an insufferably long 2-hour pukefest.

We've all moved on. So should you.