Today, a technological innovator and true visionary by the name of Steve Jobs passed away, may he rest in peace. Coincidentally, today was also the day that "Mastering the Art of French Cooking" was finally released on one of Mr. Jobs' most innovative creations, the iPad. Two geniuses--Steve Jobs and Julia Child--finally together at last. 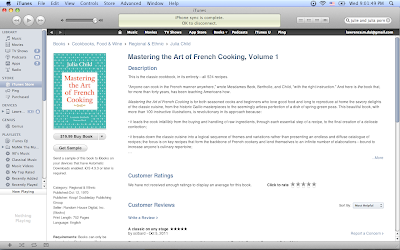 From The New York Times:

"Clumsily splattering a cookbook with bacon grease is one thing. Doing it to an iPad is quite another...

...On Wednesday Alfred A. Knopf will release the e-book edition of one of the most famous cookbooks: “Mastering the Art of French Cooking,” by Julia Child, immortalized in the best seller “Julie & Julia” and its film counterpart, starring Meryl Streep.

The introduction of “Mastering” to the e-book library is not just a testament to the book’s venerable status and enduring popularity, but also to the publishing industry’s willingness to embrace digital publishing with all its quirks, including, for cookbooks, shorthand measurements like “2 tbsp finely minced shallots,” which appear in smaller type." 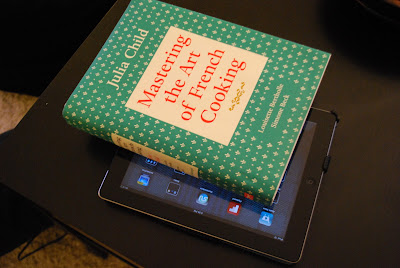 Julie & Julia Quote of the Day: "I cannot computer-coach you every day while I'm with my girlfriends."
Posted by Lawrence Dai at 9:35 PM