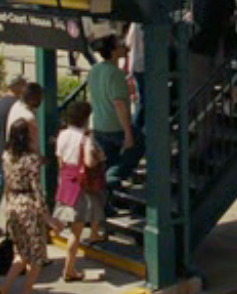 Greenshirt Manboobs is an avid user of public transportation. Looky here as he walks up the stairs to take the subway from Queens. I wonder where he is going. It is notable that he chooses to take the stairs instead of an elevator. Maybe he is trying to reduce the size of his manboobs. Then he would have to change his name to Greenshirt Regularsizedboobs. 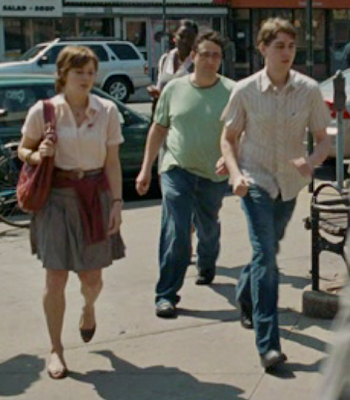 And whatdya know! A cameo from our very own Julie Powell! I wonder if she is acquainted with Greenshirt? Maybe they're subway buddies--like carpool buddies, but much, much, much less of a commitment. Like "Oh, hey... you look vaguely familiar...  you know... because we both leave for work around the same time... but New York is a big place so... yeah, I'll see you whenever..."

Or maybe Julie is having an affair with Greenshirt Manboobs. It wouldn't be unprecedented.

Greenshirt Manboobs does seem like he's in a bit of a rush though. Too much in a hurry to have an affair. Also, that green shirt is not really hiding those man boobs. 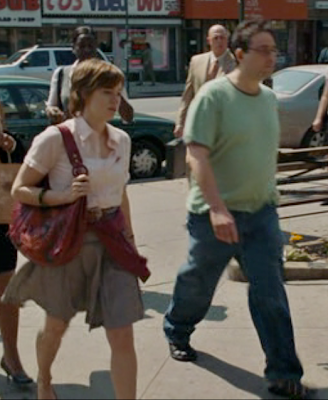 Julie & Julia Quote of the Day: "Who's talking about men?"
Posted by Lawrence Dai at 9:05 PM