For the most part, the scene composition and cinematography in Julie & Julia is bland and uninspired. But every so often, a really striking shot will distinguish itself from the rest of the pack and my eyes bleed a little less than they usually do. This is one of those shots. 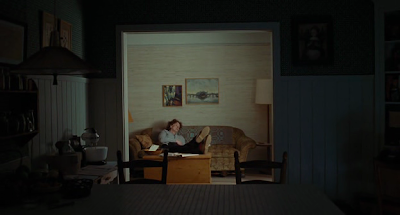 Most of the Julia Child scenes are full of lush, brilliantly hued, warm sepia tones, which lend a certain aura of authenticity to the whole "Paris in the 1950s" look the creators were so desperately seeking. But this one--the scene where Julia has just heard that Houghton-Mifflin did not want to publish her cookbook--the cinematographer dials back the lighting to depict a more somber mood.

Also, the juxtaposition of how she's lighted versus how dim the foreground is in this scene speaks to Julia's radiant personality, how she can literally light up any room she walks into. But that's just a small side note to what's really going on here--the sting of rejection. 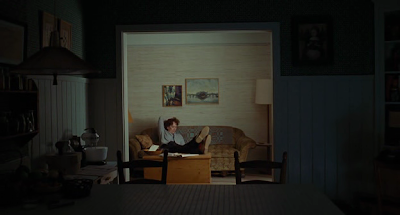 The whole rectangle-within-a-rectangle look (achieved by shooting Julia through the large doorway) condenses the entire frame and intensifies the feeling of being rebuffed that's going through her character's mind. The fact that the camera is placed so far back physically creates a distance between Julia and audience, adding to the emotional distance that she already feels at that specific moment.

In conclusion, the lighting and cinematography in this scene contribute to an overall feeling of dejection and loneliness in Julia's character.

And that, my friends, is how you write some bullshit film analysis.

Julie & Julia Quote of the Day: "Would a breakfast work?"
Posted by Lawrence Dai at 11:18 PM