As the Lawrence/Julie & Julia Project winds down (only 88 viewings left!), a lot of readers have been asking me what I plan on doing for my final viewing of the movie. Will I camp out in front of Meryl Streep's house? Will I burn a giant wooden effigy of Amy Adams? Or perhaps I'll just have a nice little dinner with friends like Julie does in the film... 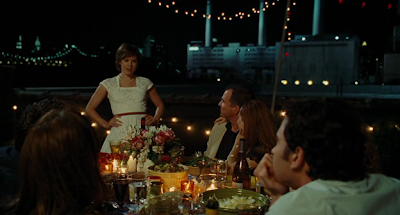 Who knows? Maybe I'll do all three? But as far as the last day is concerned, I'm afraid those are all WRONG WRONG WRONG WRONG!!! ALL OF YOU ARE WRONG! (and by "all of you" I mean the hypothetical suggestions that I came up with just now)

Allow me to explain. Back in April, I received a nice little email from a reader named Charlie M., excerpted below:


The main reason I'm writing is that I want to know if you have plans for your final viewing on Day 365. Because if you don't, we want to fly you to Denver and throw you a big party. This is not a joke, it's totally legit. In fact, it will be in the second largest performing arts complex in the country, the Denver Center for the Performing Arts where I work.

Let me briefly explain. I'm leading a new initiative of the Denver Center Theatre Company called Off-Center dedicated to creating new kinds of theatrical events and engaging new (preferably younger, 20s and 30s) audiences in new ways. We're looking to do very nontraditional stuff, and one of our ideas is to host your final viewing party for you and whoever else in Denver is crazy enough to show up. It would be a screening of course, perhaps with live commentary from you, maybe some French food, and whatever else you'd want to include.


Now, I didn't really understand what the fuck a "nontraditional theatrical event" would entail, especially for something as silly as my blog. Plus, back then I had no idea if I'd even make it this far. In fact, this whole thing could still end on any given day, all depending on when the nice men in white coats decide to come take me away.


I told Charlie that I wasn't going to commit to anything without knowing if the blog was going to even make it to the end, which to be fair, was completely honest. But in addition to that, I just didn't want to end up having these really nice people fly me out to Denver and be incredibly underwhelmed by my short stature and awkward speech patterns.

Months passed and I didn't really think much about this open invitation to Denver. I live my life on a fairly day-to-day basis, taking it one dreadful viewing of Julie & Julia at a time. Then, I received another email about a week ago from Charlie's co-curator, Emily:

I am the Curator for Off-Center at The Jones in Denver, CO.  Charlie, the other Curator, first emailed you on April 27th asking you to allow us to throw you a party for your final viewing.  He recently sent you a second email and received no response……so naturally, I assume that you don’t know how serious we are about this. 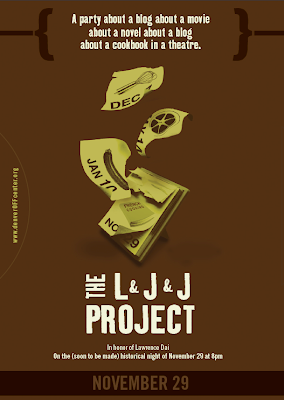 And don’t think this is some poster we crafted for you in our free time while eating Bagel Bites……….this poster was created by one of our graphic designers to be included in our season brochure that will be released this week.  See the other attachment.

The fan club is being made.
The t-shirts are being printed.
The decoder rings are being dreamt about.

Now all we need is our main ingredient.


And let's be honest here--No sensible man can turn down a fucking poster. If they went to these lengths to book my last viewing, then they must be for real. So I commend Charlie and Emily for really forcing my hand here. Lawrence Dai is a man who doesn't like to make commitments (yes, I am well aware of the irony here), but goddammit, it looks like I'll be spending Day 365 in Denver with Off-Center @ The Jones. Check out their website--it's pretty nifty.


So mark your calendars, Denver readers (and anyone else willing to make the pilgrimage)! November 29th. Shit's gonna go down.

I'll definitely be plugging this thing as I go along and right now I'm brainstorming ideas for stunts/performance art-type things. So if anyone else has any, I'd love to hear them. You can either comment on this post or shoot me an email at lawrenceandjulieandjulia@gmail.com. I think this could be a lot of fun. Or at the very least, there will be someone there to dial 911 after I attempt to kill myself for having watched Julie & Julia 365 times.

Julie & Julia Quote of the Day: "I just want to savor this moment. The moment when anything is possible."