It's been awhile since the last segment of my Director's Commentary Commentary for Julie & Julia (Parts 1 and 2 found here and here, respectively), so I figured that today I'd rev up the 'ol DVD special features once again and see how much Nora Ephron had to say from minutes 30:00 to 40:00. Spoiler alert: not much. 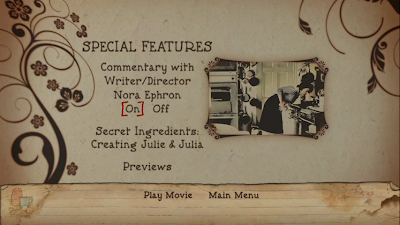 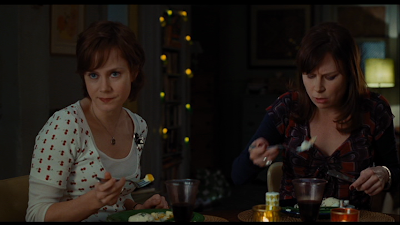 I do think that you have a… amazing imaginary relationship with people whose books you cook from, if you’re a cook like me and you, kind of get into the serial monogamy of cooking, where you fall in love with one cookbook and stay with it for a few months and then move on to another. You always kind of wonder what the person who wrote it is like and whether they’d like to come to dinner and what you would be cooking them and… its very easy to be imagining all that for Julia… Julie.

More fodder for the those in the "The-real-Julie Powell-isn't-actually-a-sad-crazy-woman-it's-actually-Nora-Ephron-channeling-her-thoughts-through-the-character-of-'Julie-Powell'" camp. A word of advice to those people: your camp name is too wordy. Rename your camp. I do sympathize with Nora when she misspeaks and says "Julia" instead of "Julie." I do it all the time. 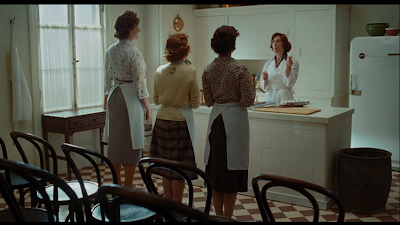 Once again, this is Paris and then… this is our rendition of the Cordon Bleu cooking school that Julia went to which we had many, many pictures of and Mark Ricker, our production designer, did an amazing job of… recreating.

Took her a while to come up with that last word, "recreating." I think she may have had a stroke in the interim. 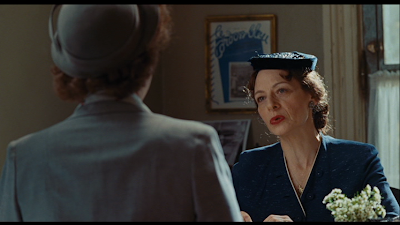 These are… this is one of my favorite costumes, the costume that Madame Brassart is wearing that Ann Roth, of course, designed.

The woman playing Madame Brassart is Joan Juliet Buck, who’s an editor at Vogue, and whom I’ve known for years and who lived—grew up in Paris and I just emailed her one day and I asked her if she could act and she emailed back yes. And she came in and read for three parts, one bigger than the next, and we gave her the biggest one. I think she’s an amazing actor.

1. Just name-drop more, Nora Ephron. Oh, she's an editor at Vogue? Oh, you've known her for years? Oh, I don't give a shit? 2. This is apparently how a major director casts her films--she emails people and asks them if they can act. When they reply, she takes their word for it. "Hey Chris Messina, can you act?" "No." "Well, do you think you could do a really shitty Mark Ruffalo impression?" "Yes." "You're hired!" 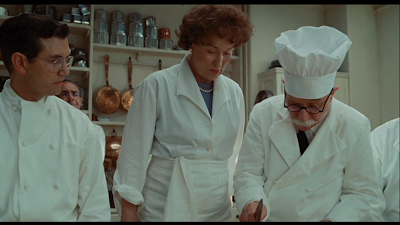 George Bartenieff is the actor who plays Chef Max Bugnard, who was a very well-known chef and cooking teacher who… took a real interest in Julia. They became very involved in each others' lives—he was really her mentor—he really believed in her. And George, who’s a wonderful New York actor… in these scenes looked exactly like the original teacher, who is in fact on the back of Mastering the Art of French Cooking, Julia’s masterpiece.

Am I picking up on some weird sexual overtones in your speech, Nora? Sounds to me like it sounds to you that Julia and Chef Max Bugnard did the dirty. Stuffed a few chickens, if ya know what I mean. Someone (not me) should look into this. Oh and Nora's wrong--that guy looks exactly like Colonel Sanders. 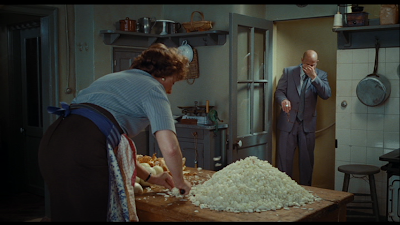 This scene, you truly believe that Meryl is… 6’2”. She’s so Julia in this.

So, according to Ephron, being "so Julia" means that you really look like you are 6'2". I guess by her standards, Arnold Schwarzenegger, Jim Carrey and Will Smith are also very "Julia." 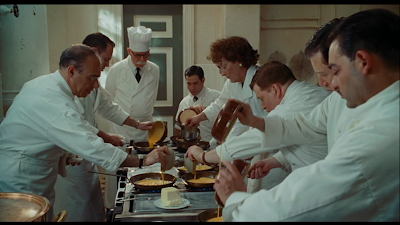 This was one of those scenes that… I’m sure the equivalent for… for male directors is an automobile race or something. This is what this felt like for me—14 people making omelets simultaneously… with, on real… on a real stove.

This actually cracked me up. Nora Ephron is a sexist. "Oh, I'm so feminine and feeble--I could never direct a big car chase sequence." Also, she doesn't say car chase. She says "automobile race." Haha, automobile. What is she, 70 years old? 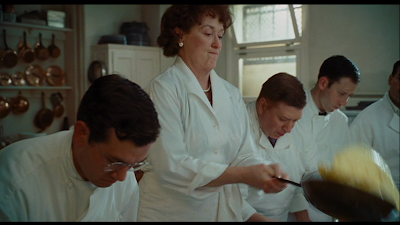 And Meryl just completely nailing the flipping of that omelet. 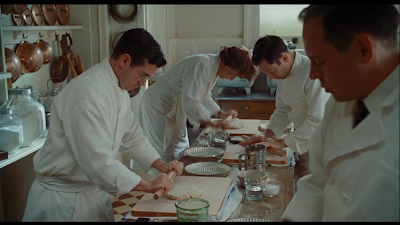 This is almost word for word, a letter that Julia Child wrote when she had, when she just began… her… time at Cordon Bleu, it’s—she just fell so deeply in love with this. It was a person who had never known her entire life what she wanted to do and suddenly, there it was.

That's actually kind of nice. I have nothing snarky to say about that. 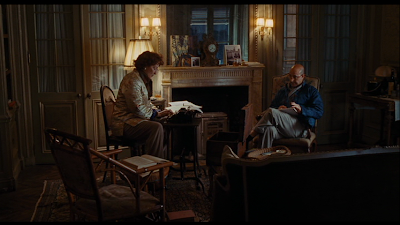 Julia and Paul very often had no heat and they used to wear their little Chinese quilted jackets.

That's fucking racist. As a Chinese American, I take great offense to that. *takes off quilted jacket, throws it on the ground in fit of rage* 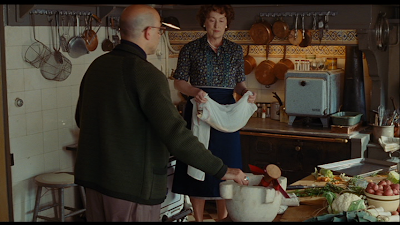 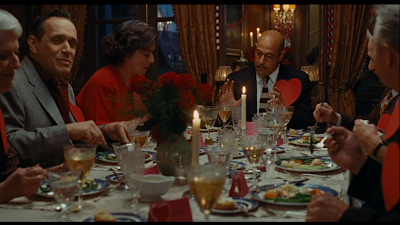 Valentine’s Day was a huge holiday for the Childs and these little hearts are taken from one of their Valentine’s Day postcards that they sent out, pictures of themselves with little red hearts pinned to themselves. They sent these out almost every year and we replicate a couple of them later in the movie.

Thanks for telling us what's going to happen later in the movie. It's not like we're going to watch this whole fucking movie with your awful director's commentary. OH WAIT.

It’s very well known that Julia and Paul were in the OSS and they are often described as spies, but it seems to me that… that they were not really spies. That they had access to… that they worked in intelligence and they had access to classified material, but really I think Julia was a clerk, and its where she learned her fantastic organizational skills that came in so handy when… when she became… obsessed with food.

So the sole reason Julie & Julia isn't a badass James Bond-style spy thriller is because Nora Ephron didn't think Julia and Paul were really spies. Someone get a real (read: male) director on the phone. Julia Child: Ghost Protocol is just begging to be made (also, please don't misconstrue that as a sexist statement--I'm only following the rules Nora had established previously in her barely coherent director's commentary). 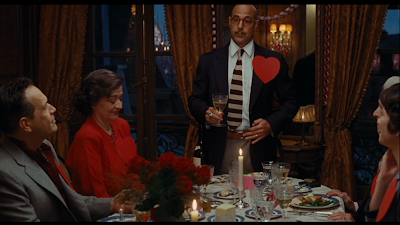 And once again, this is a toast that Paul Child gave to Julia. 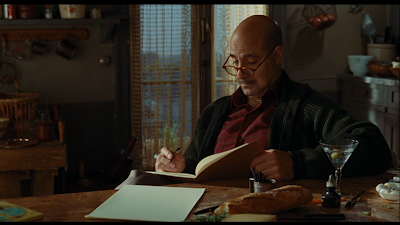 And this, is word for word, a letter that Paul Child wrote to his brother about… his remarkable wife.

So much letter-writing in this movie. I guess if I was married to Julia Child, I'd probably write a lot of letters too. "Dear brother, my wife is a giant who crushes me in bed. At least she can cook." 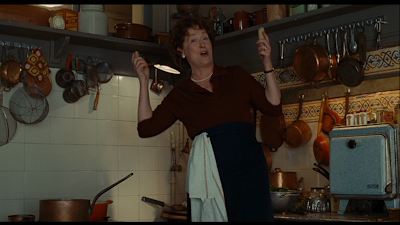 I would never have dared to write the end of this scene.

Ms. Ephron is, of course, referring to the "These things are as hot as a stiff cock" line. If she had written it, I probably would have called her out awkwardly inserting another crazy Ephronism into the script, but apparently this was a legit J.C. quote. That makes it 20x better. 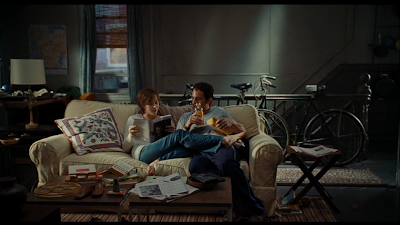 That line [the stiff cock line] is quoted… in the biography of Julia that… Julie Powell is reading in that scene, Appetite for Life. And interestingly, when Julia put it into her own book, My Life in France, when she was much older, she left that last line out. I think she’d gotten kind of—a little more puritanical in her old age and she just didn’t want to cop to the fact that that line had come out of her mouth.

What Nora meant to say: "I think she'd gotten kind of--a little more puritanical in her old age and she just didn't want to cop to the fact that that stiff cock had came into her mouth."

Wait, what? Did he really just say that?