Today's featured Random Actor Tuesday isn't exactly a traditional "actor" in Julie & Julia per se... but she is, however, an instantly recognizable icon whose influential work spans across many, many films.

Yup, today's featured random actress is the woman from the Columbia logo.

Let me be honest with you--I hate this Columbia logo bitch. I hate her Julie Powell-lesbian haircut, I hate her long billowy robes, I hate the way she holds up that fucking torch like she's better than everyone. She is probably the worst motion picture company logo in the history of film. I'll take the MGM lion or even the fucking Paramount mountain peak over this whore any day.


But why do I reserve so much hatred and vitrol for such a seemingly inoffensive and basically inanimate portrait of this woman? It's what she stands for, goddammit. Every time I see her stupid face and her stupid torch proudly held up high, it means that I'm in for another 2 hours and 3 minutes of mindless numbing pain. She is the harbinger of evil, the omen of suffering, the angel of death. 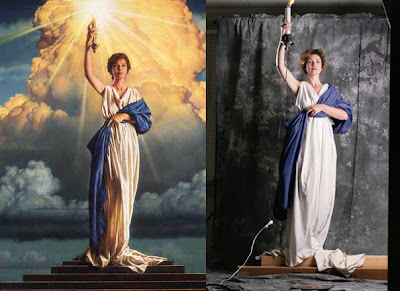 I swear to god, I'm going to hunt this woman down and strangle her with my bare hands.

Julie & Julia Quote of the Day: "The one in your head is the one that matters."
Posted by Lawrence Dai at 1:06 PM