During today's viewing of Julie & Julia, I noticed something that I thought was kind of funny--who knows if anyone else will... 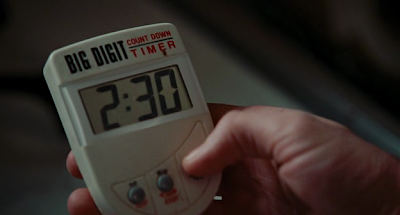 BIG DIGIT COUNT DOWN TIMER
We see this kitchen timer in the pivotal "Julie prepares Julia's famous boeuf bourguignon scene" and it is the perfect example of what I would consider the opposite of Julie & Julia product placement, where the product in question could not possibly be more generic. I mean seriously, the name on that thing basically says exactly what it is--a BIG DIGIT COUNT DOWN TIMER.
Case in point--the "2:30" display certainly contains DIGITS and BIG ones at that. Also, the device appears to be a TIMER of sorts, as it presents a measure of time on its BIG DIGIT display. And presumably, the clock COUNTS DOWN, which is confirmed later on in the film. Thus, the name BIG DIGIT COUNT DOWN TIMER was born.
I realize that while most timers probably don't have a ton of words written on them, there's usually at least a company name or something. And I checked--BIG DIGIT COUNT DOWN is not a company. 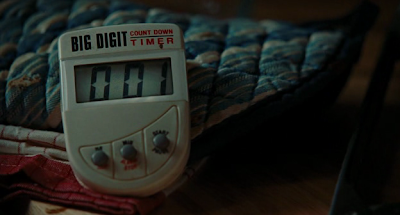 BIG DIGIT MOTHERFUCKING
COUNT DOWN TIMER!!!!!!!
The propmasters clearly did not put much time into this one. "Hey Janice, what should I write on this kitchen timer?" "I don't know, will it ever be in close-up?" "I'm not sure..." "Ah, fuck it--just write something obvious... like 'Big Digit Count Down Timer,' but less stupid-sounding." "Uh, okay." "Trust me, it won't matter--no one's going to notice that anyways."