It's safe to say that when it comes to watching Julie & Julia, not much gets past me anymore. That isn't to say absolutely nothing gets past me. For example, just the other day during a screening of the film, my friend Sarah pointed out to me that the words "Sauvignon Blanc" were misspelled as they appeared written on a window (during the scene where Julie Powell admits she's a bitch). 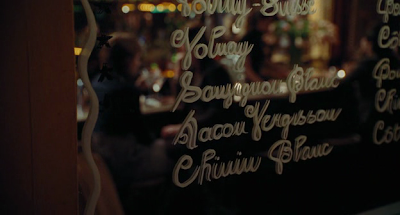 I'll be honest--at first, I was like "What the fuck is a saw-vig-non?" But soon after I was educated on the virtues of this fine wine, I realized that this was something worth looking into for a post.

Even though I had never heard of Sauvignon Blanc before and had no idea how it was spelled at the time, I told Sarah that clearly she must have been mistaken, because no one in this movie would make such a glaring error. But then upon closer inspection, it appeared to me that something was off.

That reads as "Sayiguou Blauc," does it not? What the fuck? Those aren't even close to being words. I mean, that clearly does not say "Sauvignon Blanc." This whole time, I had just assumed it was some kind of fucked-up spelling of a fucked-up French word, but apparently I was mistaken.

In fact, not a single word on the entire menu is spelled correctly! 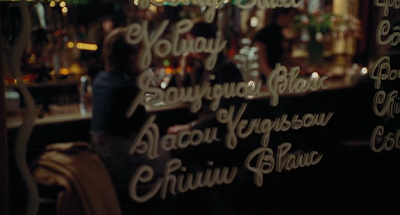 Maybe I'm just being stupid here and the solution is nothing more than the weird cursive font is throwing me off. Perhaps the explanation is simply that all the "n's" look like "u's" or something.

But nah, fuck that. Whoever it was--set-dresser/prop-master--who scribbled that crap on the window is either a dumbass when it comes to spelling or thinks he/she can just pull words out of his/her ass. I'm looking at you, NACHO FERGUSON.