Today is a historical day for Random Actor Tuesday. Because today, the Cheese Guy speaks out. 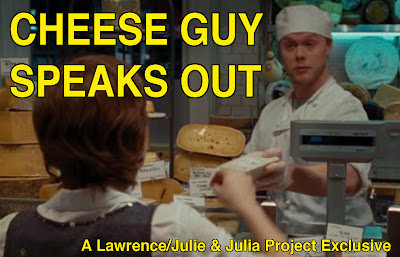 For those of you who may not remember, Jaime D. Hall plays the elusive "Cheese Guy" in Julie & Julia and was prominently featured as the Random Actor Tuesday all the way back on Day 148. A couple of weeks ago, he sent me an email of the complimentary nature, which prompted me to ask him to guest blog for a day, thinking that he would enlighten us with his experiences on the set of Julie & Julia. And boy did he not disappoint. Ladies and gentlemen, without further ado... the Duke of Limburger himself... Jaime D. Hall a.k.a. "Cheese Guy"!!!


In May 2008 (approximately), I had been working in the Cheese department at Dean & Deluca for about 2 years and was the product buyer for the SoHo location for a few months. I discovered that Columbia Pictures was looking for extras from the pool of employees at D&D for some background work, something I had not done since being in NYC.  I was floored and immediately jumped at the chance to be in a film and make some extra cash. At this point I had no idea what the film was about or who was involved.

After the store had closed down for the night, 9pm, I believe, the crew began setting up the camera and lighting equipment.  Because Julie is supposed to be shopping during the day and it was most definitely nighttime, the crew set up huge light structures outside every window to simulate daylight as well as hanging stage lighting from the piping running along the cavernous 20 foot ceilings.

Setup went well into the night until about 1am or so. Then came the shoot which was definitely the most exciting part of the evening. At that point, Amy Adams arrived and they did several shots of the produce stand, having her pick up various items, smelling them (which I found a little odd), and other various "I'm in an upscale grocery store" actions. 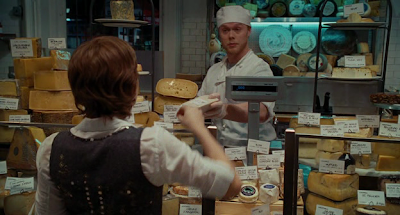 During all this shooting, I was free to walk around, eavesdrop on the director (Nora Ephron, who embarrassingly enough, I had never heard of), sip coffee, and give out samples of....what else? CHEESE. I was able to connect and talk at length with various staff about cheese and eventually was able to lure over Nora, herself.

She tried some selections and eventually settled on a few she liked, one of which was my favorite L'edel de Cleron....check it out, it's delicious!

After obsessing over the cheese selections to make sure they looked pristine, the time came to shoot the now-kinda-famous "cheese scene". 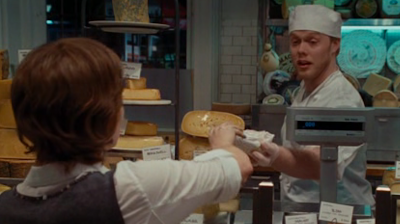 To say I was nervous would be accurate....to say I was shitting a brick would be much MORE accurate. There is no more humbling feeling than having a twenty thousand dollar camera, bright-ass lights, and Amy Adams stand before you. I thought I would burst into a million pieces.

Nora asked me to select a few wrapped cheeses to hand to Amy and to deliver a couple if short lines, which she coached me on,

"How about, ' You're really gonna love this one!' Or ' This one goes great with fig jam!'"

Amy was super pleasant and put me right at ease by kindly introducing herself and flirtatiously remarking," Ooooh, I'm gonna run away with the Cheese Guy!" We had a lot of fun with that scene....

Two takes and that was it, I was immediately mobbed by about three PAs looking to get my signature on some random legal documents and a whirlwind of other papers. Little did I know at the time that in one evening, I had achieved what some actors work years for....the chance to join the Screen Actors Guild. It continues to be the pinnacle achievement of my acting career. Not to mention that I got a 700 percent pay raise and residuals to boot! Sweeeeeet.... 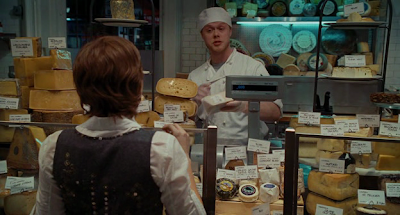 The shoot ended at about 8am the next morning and my wife and I wearily made our way home.

Fast forward a year later to 2009, Elizabeth and I have moved to Chicago so my wife can pursue her Masters Degree. I had just started a job as a server at the Marion Street Cheese Market in Oak Park, IL, when the film finally hit cinemas. I was pretty mum about it to my work friends, but had encouraged family and friends on facebook to go see it.  It had been out about a week, when a friend (and co-worker) named Chris Richardson saw the movie, put two and two together, and promptly outed me to the rest of my work family.

It wasn't that I was embarrassed necessarily, I just didn't want to make a huge deal of it.  Not to mention that I kind of liked the anonymity. 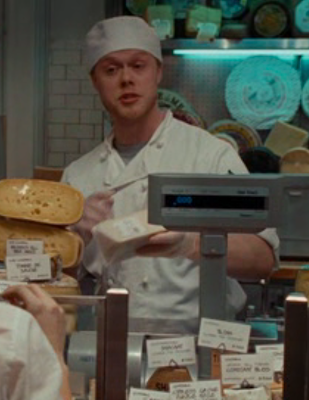 All of that was blown away, however, when word got out to the local newspapers and a reporter for the Wednesday Journal weekly paper asked to interview me and take some photos. A little embarrassed and not wanting to seem impolite, I agreed. If I can find it, I will forward it to you for your amusement...it has a photo of me, all too seriously, pouring wine for some patrons.

As quietly pleased as I was with the attention, the interview became playful fodder for my co-workers, some (Chris) would go so far as to clue my tables in to my celebrity status while in the middle of an extreme rush, so I would be compelled to politely field questions about working with Meryl Streep and Stanley Tucci....actors I had never worked with.

The excitement eventually died down and things returned back to normal as they always do.  I did many other shoots as a background actor, most notably on the pilot of Boardwalk Empire, When In Rome, and Salt. Julie and Julia, however, continues to be my fondest memory and I am grateful to have finally joined one of the most prestigious unions in the world....all thanks to Nora Ephron and her wonderful film.

Thanks for taking interest in my story (sorry for all the ellipses), best of luck with the blog, and thanks to all the readers for their support of Lawrence and his odd, compelling, and lofty quest!

What a great tale--full of intrigue and sexuality! And he's a class act too! Jaime Hall, everyone! The first Random Actor Tuesday to come out and share his Julie & Julia story! Special thanks to Jaime of course, for emailing me and making this happen--I knew a RAT would get in touch eventually--but never in my wildest dreams did I think good 'ol Jaime would be the one to do it.

I want you all to know that I will always hold a special place in my heart for Jaime D. Hall, the "Cheese Guy."

Julie & Julia Quote of the Day: "Is that not the most wonderful cheese you ever had in your life?"
Posted by Lawrence Dai at 8:05 PM