"This has got to be a cookbook that makes French cooking accessible to Americans who do not have cooks. Who are servantless... Is that a word? Servantless. I think it is a word."


--Julia Child, from the film Julie & Julia
This is always a funny and endearing scene for Julia Child. I know what most people end up thinking after this one: "Oh what a whimsical notion! She's going to author a cookbook and doesn't even know whether or not 'servantless' is a word!" This scene is the definition of light-hearted and inoffensive. But the question remains.


Is "servantless" a word?
Spellchecker certainly doesn't think so. But fuck spellchecker. Wut dos its no abbout speling neways? Let's consult the always trustworthy internet, shall we? 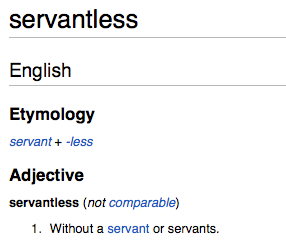 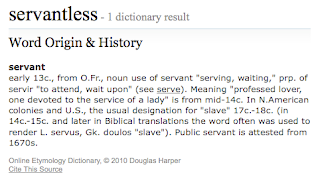 
Final Verdict: "Servantless" IS a word.
Sure, the idea of Julia Child "inventing/not giving a shit about" a word is rather novel and kind of fun, but "servantless" was in fact, a word long before Julia Child was ever born. Kind of takes the magic out of it, doesn't it?

But whatever. By featuring the phrase "For the servantless American cook..." so prominently in Mastering the Art of French Cooking, Julia popularized the word and introduced it into the cultural lexicon. Or something. Yeah, cultural lexicon. We'll go with that.

Julie & Julia Quote of the Day: "Here's my final word on the subject."
Posted by Lawrence Dai at 11:13 PM