According to imdb, there is apparently some guy named Tom Stratford who plays a so-called "gangster" in Julie & Julia.

Now it's safe to say that I have seen the film Julie & Julia a considerable amount of times. And I can also say with some confidence that I have never seen a fucking gangster in this movie. Like, what scene could possibly feature a gangster without me noticing? Surely not during Julia's stint at the Cordon Bleu. And at Dorothy's wedding? Forget about it. There are definitely no gangsters in this movie. It's fucking Julie and fucking Julia for christssakes!


Time for some hardcore sleuthing. With a quick google search, I immediately located Mr. Stratford's actor homepage and discovered this little gem of a pic. 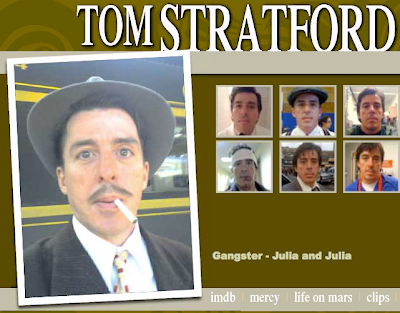 So not only does this guy exist, he actually did play the purported role of "gangster" in Julie & Julia. And he was proud enough of his role to put it on his personal website too! Along with those other awkward, obviously self-shot portraits... But wait, I don't think I've ever seen this fucking guy ever.

I mean, I don't exactly question the fact that he's in the movie--I just don't think I've ever noticed him before... and I notice pretty much everything...

Oh wait, that background in the photo looks somewhat familiar... Could it be?


Don't see him? Lemme zoom in on that.


Boom! Mystery solved! There is our gangster! Tom Stratford! Actor at large! The best movie gangster portrayal since Marlon Brando in The Godfather!

Seriously though, what about this dude makes him a gangster? The fact that he smokes and wears an old-timey hat? Does that make Sherlock Holmes a gangster then?


Maybe I'm being a little mean, but dammed if it's not hilarious that this guy put his Julie & Julia "role" on his own website, as if he were more than an inconsequential extra. I like to think that he fabricated this entire "gangster" character/persona and added it to imdb himself in order to feed his delusions of being a legitimate actor. Like, he probably stayed up all night crafting a detailed character history and origin story in order to help inform his totally unremarkable performance as "some guy with a cigarette walking in the train station."

But then again, if any of us were presented with the same role, who's to say we wouldn't rather choose to live the lie? To tell the other extras to go fuck themselves, because we are better than that. To don a hat and cigarette and play pretend just one more time. To act as though we were the stars of our own movies. To fully embody the "gangster" in all of us.