Whenever I watch Julie & Julia, I always find myself wondering what kind of movie poster the Powells always have hung so prominently in their apartment. 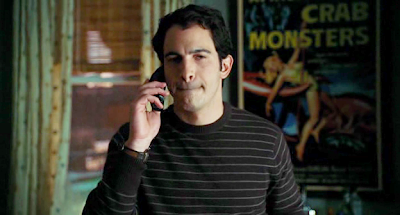 CRAB MONSTERS!!!
That poster is such a bizarre and comical background prop. I mean, it's fairly cool for the camp value alone... and the vintage design of the poster makes for a very hip little addition to the apartment. And it sort of informs the characters of Julie & Eric i.e. they try to be cool by having ironic appreciation for bad movies.

Also, as commenter Danny pointed out, there's something of a connection between these crab monsters and the whole "lobster-killer/killer-lobsters" bit played out earlier in the film. After all, crabs and lobsters are both members of the crustacean family. Well done, set dresser.

I couldn't just stop there though--I had to look into this "Crab Monsters" movie and see if it had any deeper meaning in relation to Julie & Julia. 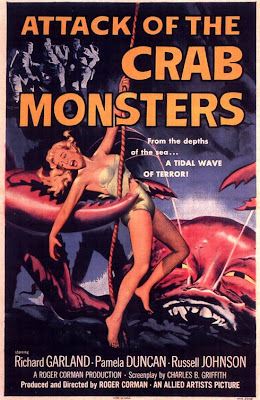 This is the actual poster in all of its entirety. Glorious, is is not? And now we know that the movie's full title is actually Attack of the Crab Monsters. Brilliant! Not only are there such things as crab monsters, but they are in fact, "attacking." Sounds like a great flick. Let's consult the wikipedia plot summary to confirm:


"A group of scientists land on a remote island in the Pacific to search for a previous expedition that disappeared and to continue research about the effects of radiation from the Bikini Atoll nuclear tests on the island's plant and sea life. They learn to their horror that the earlier group of scientists have been eaten by mutated giant crabs that have gained intelligence by absorbing the minds of their victims. Members of the current expedition are systematically attacked and killed by the crabs, which are invulnerable to most weaponry because of the mutation in their cell structure. Finally, they discover the crabs are the cause of the earthquakes and landslides that are destroying the island. As the remaining expedition members struggle to survive on the ever-shrinking island, they must also find a way to stop the crabs before they reproduce and invade the oceans of the world."

Yeah wait, there's no way this movie isn't fucking awesome. Mutant giant killer crabs? AWESOME. Oh wait, I think I might have seen this movie before... yeah, yeah I remember: the one where that blonde chick has a major crabs problem! 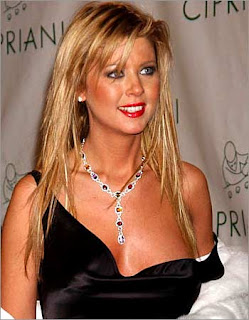