Being the socialites that they are, both Julie Powell and Julia Child attend many get-togethers and parties throughout the course of this 2-hour movie. 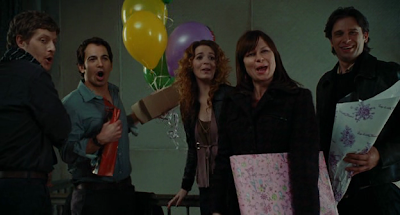 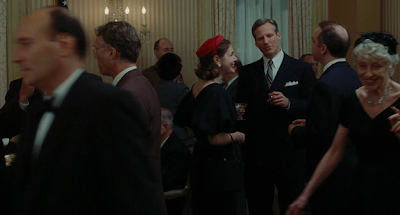 So when avid L/J&J Project reader James C. extended an invitation for me to hang out with a bunch of his buddies last Friday, I couldn't help but feel simultaneously flattered and a little creeped out:

CONGRATULATIONS on finding a job in sf!!  it was ESPECIALLY exciting because I LIVE IN SAN FRANCISCO and got excited that i was in the same 2 mile vicinity as one of my asian role models.

to help hasten my destiny, i would cordially like to invite you to a small gathering this friday at my place in chinatown, where you can regale us with l&j&j stories and snarky comments about what people are wearing.  yes, like a performing monkey.

Though it was a nice little email, I told him that I would unfortunately not be able to make it... To be fair, I already had made plans to go out to eat with my brother and sister-in-law, so it's not like I just turned down James' invitation on the basis that I thought he might've been some kind of serial rapist... 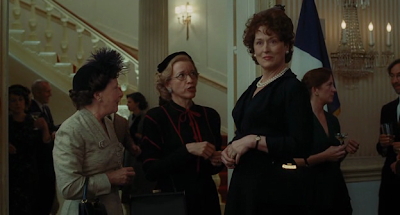 Anyways, I told him to get back in touch if another opportunity arose and lo and behold, it did. This time by the invitation came by mass email from his lovely friend and fellow devoted reader, Angeles G.


Lawrence (!) - in your email response to James you seemed open to hanging out with us - your biggest fans in San Francisco! So...consider this your second invitation. :) For those of you who don't follow Lawrence's fabulously-ridiculous-and-always-entertaining-blog, he's what we like to call a "celebrity blogger." Prepare to be utterly unproductive at work for a few days. It's the San Francisco equivalent of trying to get an actor/model to come to your party if you live in LA.

And this time around, I was like "Hey, what the fuck--I'm in!" (Note: This had nothing to do with the fact that Angeles is a girl and I would much rather go to a random internet girl's Julie & Julia party than a random guy's). In a certain light, all of this made perfect sense to me. So I rounded up a few friends and last night, we went to Angeles' super cool apartment and had a fucking awesome time. You can view all the debauchery (special thanks to James for supplying the photos).

Special thanks to James for the initial invitation and especially to Angeles and her awesome mother for being such gracious hosts! My friends and I all had a great time and met some pretty cool fucking people. New friends are a rare commodity when you're a guy who watches the same shitty movie every day, so I am incredibly thankful that I have such fun and non-murderer readers!

Seriously though, if you invite me to a Julie & Julia party, I will probably come. I am desperate for human contact at this point. GODDAMMIT ME, WHY ARE YOU SUCH A FUCKING WHORE?!?! lawrenceandjulieandjulia@gmail.com