Day 223 - The Return of the Real Julie Powell

As some of you might know already, the real-life Julie Powell was no stranger to the Lawrence/Julie & Julia Project in its early days of its existence. In fact, she was one of the first people to ever leave a comment on my blog!

Imagine that--barely a few days into the project and I get Kudos from the real Julie Powell--I was starstruck! And it appeared to have came from her original Julie/Julia Project blogspot account too! Mad fucking surreal. And then if that wasn't enough, a few days later she commented again!

This comment was in response to the now-famous "How is This Guy Not Mark Ruffalo?" post. I said that Messina was a hack and that Mark Ruffalo would have done a hell of a lot better as Eric Powell, but then she goes and sings the praises of NMR. I was looking forward to what was hopefully going to be the beginning of an antagonistic relationship between Lawrence and Julie (and Julia, if she wasn't already dead).

But then the correspondences stopped. I don't know why--they just stopped. I went 200-something days without ever getting another Julie Powell comment.

I assume the real Julie just stopped reading. After all, I can't imagine her getting any enjoyment out of seeing some random guy on the internet write "Fuck you, Julie Powell" every day. And long ago, I had decided that I wasn't going to let the real Julie stop me from spending day after day shitting on the "Julie Powell character" in the movie... I mean, I suppose there is a fair amount of overlap, but I am in no place to say who I actually despise--Julie Powell the person or Julie Powell as written by Nora Ephron and portrayed by Amy Adams.

But then a few days ago, completely out of nowhere, she came back.

That's right, the triumphant return of the real Julie Powell was marked by some interesting insights on my Sony Vaio product placement post. As you can see, she did not actually have a Sony Vaio laptop, but it was indeed "big and ugly." Also, "dial-up." How prehistoric. And the lamp! The lamp in the movie is apparently her real lamp! Interesting tidbit that only the real JP would know! 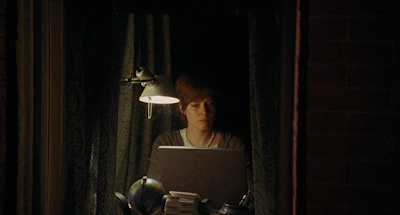 Really interesting stuff--and it added cool perspective for me, as someone who watches Julie's life unfold onscreen every day. And then it happened again!

The goofy expression in question was detailed in this celebrity look-a-like post, where I sort of might have made fun of the real Eric Powell. It was nice to see Julie running to his defense like that. And the Tony Danza joke? Well, that was in reference to the fact that some software said she looked like Tony Danza. What do you know? The real Julie Powell has a sense of humor about herself!

My world has been turned upside down. I want to hate this lady, because I hate how she's portrayed on the big screen, and yet, every "real-life" interaction I have with her over the web/through this blog has been encouraging, beneficial, informative and/or humorous!