A lot of random actors in Julie & Julia go unheralded. Some even go uncredited. But none moreso than this guy. 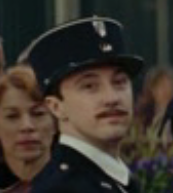 Now, I have no idea who this guy is or what character he's supposed to be playing (some kind of train/platform conductor? Imdb lists Jonah Triebwasser as "Paris Train Conductor," but I think this guy looks to young to be him), but whoever he is, he's the fucking man.

Why? Well, I don't know. He has a sweetass mustache for one. Also, he gets to wear a cool, badass uniform. How rad is that?!?

But probably the coolest thing about this guy is that he seems genuinely pleased--you know, just happy to be there. Like, "Yo, I'm going to be in a mainstream film seen by a shitload of people. I'm the man."

He's clearly thinking about all the women who are going to be watching this movie and how he can somehow parlay this tiny appearance into some sort of sexual experience. I mean, I'm pretty sure most male random actors thought this at some point. But this guy is just wearing it on his fucking face. What a boss, right?

I mean, his expression is just full of sincere joy and I fucking love it. He's looking right into the fucking camera! Actors aren't supposed to do that! What a goofball!

Whoever this guy is, he knows that this is the last time he'll ever be this close to Stanley Tucci, Jane Lynch and Meryl Streep and he's just fucking taking it all in. Right on, brother. Right on.