Hello, friends. You may have noticed the dripping condescension in my introduction: This is my way of noting that I am not Lawrence Dai. Your faithful blogger, I am sure, is watching the movie today, but he couldn’t possibly find a moment to fart out the Gerber-caliber slop you’ve become so used to at 11:45 p.m. CDT. He tells me he’s on a date--no, wait, writing a paper, about his brother’s wedding or some such thing--so I’ve stepped in. My name is Jack Dickey, and I write about sports for Deadspin. I’m on Twitter, too.

Anyway, Lawrence told me I should write about sports, because you guys love sports almost as much as you love julienned onions and clarified butter, and, I suppose, this wretched movie. But it’s all the same: Russell Westbrook is the Julie Powell of sports. 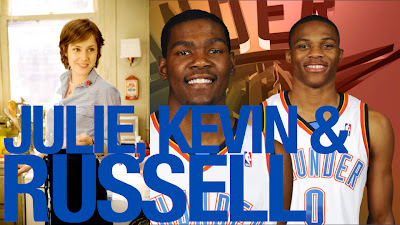 I’ve only seen Julie and Julia once, and that was enough for me. It’s a slapdash, schmaltzy film with one decent performance in it. Never mind, of course, that you can catch hours of Meryl Streep’s excellence in other films and Julia Child’s squawking authority on your local PBS affiliate. The sexual chemistry on Cooking at Home With Julia and Jacques (which you can watch on Hulu, too) tickles so much that you can put your Tucci cardboard cutouts in storage. But I wouldn’t say the movie disappointed me--if only because I was never appointed in the first place. You can’t go into a Nancy Meyers Nora Ephron movie and expect anything besides the fake female empowerment that J+J eventually gave us.

But if I am expected to write about sports, I have to explain that the semifinal round of the NBA, particularly the series between the Dallas Mavericks and the Oklahoma City Thunder, drowned me in the unmistakable sour milk of letdown. Dallas dispatched OKC in five easy games, and the Thunder squandered comfortable leads in the last two. Which sucked. I--as have many others over the past few weeks, and months--became a little bit of a Thunder fan, despite the team’s terrible name, despite its location, despite the way its owners hijacked it from the suffering fans of Seattle. We fell in love mostly because of OKC’s two young stars, Kevin Durant and Russell Westbrook.

Durant is easy to admire: He has the game of any sharpshooting two-guard, except he’s 6’ 9” and plays small forward, usually. This season was his fourth in the NBA--he’s only 22 years old--and his second leading the league in scoring. Plus, he wears a backpack to press conferences and shootarounds. Seemingly nobody wears a backpack after leaving college, and yet. KD will wow us for a long while.

But our emotions get murkier when we think about Westbrook. He’s a point guard, a couple months younger than Durant and a season less experienced. He does plenty of things well: he drives and rebounds better than most any point guard playing today (save Derrick Rose), and he scores commensurate with that: a lot. But he’s not the pretty, perpetually lethal scorer that KD is. No, Westbrook’s shorter than Durant and his jumper is too. And when you watch him play, you cannot understand why he ever pulls up for a jumper. It’s not as though he’s running around, and coming off screens like KD. He always has the ball—when he pulls up and shoots it, it represents a conscious decision on Westbrook’s behalf. The best play, he figures, is if I take a shot. Not a particularly good one, not a necessarily uncontested one, not a close one, but any shot. It’s the path of least resistance, and it vexes the fan so, when he can see just how well Westbrook does everything else. Westbrook shot a troubling 39.4 percent from the field in the playoffs, and did so while taking a ton of shots--20 per game, just as many as Durant had, and in fewer minutes.

Folks tend to superimpose morality onto sports, basketball even more so than others, so when I call Westbroook selfish and short-sighted, I mean only to refer to the way he plays ball. And he’s two years older than I am, and, well, I couldn’t run an NBA playoff offense. He’ll get better. But again, ye gods, what a selfish human drain on my wallet.

Not unlike, say, Julie Powell, who treats Not Mark Ruffalo and her friends so poorly while she cooks her way through that lovely book. You’ll certainly recall her attitude, and Amy Adams’s pallid scowls. (Until Mary Lynn Rajskub, the hero of the dear departed Larry Sanders Show lays down the law.)

I don’t know if Lawrence has advanced this theory before, but I wager that men and women view Julie Powell (and, okay, everything) differently. The idea behind Ephron’s character is that she’s spunky if a bit ornery, determined if downtrodden, and most certainly not in the business of bowing to her husband. (I think we call this a “strong female role.”) But men perceive this kind of thing as “bitch.” (I note here that I’m baffled you all have stuck with Lawrence’s folksy misogyny for so long, especially given that he applies it to such a feminine movie. I tried to find all the posts he’s used “bitch” in, and there are more than 20. Uh. I take that back: he’s used it in more than 40 posts.) Julie’s not an effective strong female to men, because her accomplishment--all this cooking--pales in comparison to, say, what Vin Diesel accomplishes in any of the Fast and Furious movies. We Men Are Limitless, as Bradley Cooper taught us. But women, especially those who are trapped, like Julie, might perceive her cooking feats as kind of awesome. Does this make any sense? (I’ll pick it back up when Lawrence has me guest blog for the final three months.)

And it’s weird, you know, how the most vociferous defender of Westbrook’s disappointing play is Kevin Durant, who said that those attacking Westbrook should recognize that he, and his game, got OKC to the NBA semifinals. Durant would seem to be the one most harmed by Westbrook’s play, yet he won’t let the media pick on Russell. Part of this is the code of team sports, to be sure, but another part of it comes from outsiders’ inability to understand the mental strain involved in basketball, more specifically: choosing whether to shoot or pass, on such a stage. I just might be wrong about Russell Westbrook, and I’m even more amenable to that possibility if Kevin Durant tells me it’s the case.

The diluted version of this confusion might be the way we (men) perceive Julie Powell. Any of you think she’s great, strong, whatever? Probably not. Maybe this movie’s just stupid.

Jack Dickey will be on the Memorial Day shift at Deadspin. Come say hello. Email him here.