Or I guess it should be Random Black-tor Tuesday, considering that today's featured player, Guiesseppe Jones, is one of two black people in the super racist Julie & Julia. 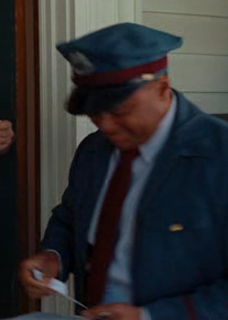 Now I like to think of myself as a person who doesn't see color (I mostly just see Amy Adams making a fool of herself onscreen), but it should be noted that as one of the only two black people in this movie, Guiesseppe's not-too-enviable role as "mailman" is nothing more than a footnote of a footnote in the grand mythology that is Julia Child.


I mean, I guess it's cool that Guiesseppe got to deliver the letter from Knopf that told Julia she was being published, but c'mon! He has two lines! The one above and right after, he says "There you are."

There you are, Julia Child. There the fuck you are. Now that that's over, I, Guiesseppe Jones, am going to go fire my agent now. "You get to have a scene with Meryl Streep," he says. "It's a crucial moment in the plot," he says."The entire movie is hinged around it," he says. "You get to be a man in uniform," he says. Well that's just great. Do you know what I say? Fuck you, David Greenblatt. You are fired!


Anyways, I (as Lawrence now) feel for Guiesseppe Jones, probably more than I feel for other RATs of the past. Mostly because of my white guilt. And I'm not even white!


So that about closes the book on Guiesseppe Jones, our resident unemployed black man (It's true! He hasn't had a gig since Julie & Julia! I'm not a racist!). But before we depart, I just wanted to leave you with something I discovered while doing some research on our friend Guiesseppe (what an awesome name, right?). He has a facebook.

UPDATE: And his wife went to Northwestern (where I go)! Who'd a thunk it?