There's a scene towards the end of Julie & Julia where Judith Jones helps Julia Child come up for the title of what was to become her legendary cookbook, Mastering the Art of French Cooking.

As avid watchers of this movie will know, Julia's book was originally titled French Recipes for American Cooks, but that title was absolute shit. Judith Jones herself said it was "terrible." Thus, the super important, not-at-all excessive renaming-of-the-cookbook scene was born. This is the stuff that legends are made of, kids.


Apparently, her go-to method of naming books is by writing a bunch of cooking-related words on notecards and shuffling them around. Nice. 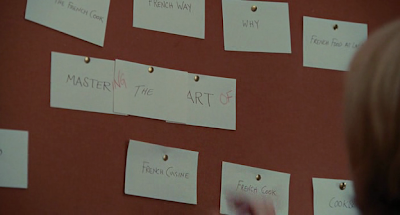 Actually, to be fair to Judith Jones, Julia asks her if "this is the way you normally do this," to which Judith responds, "absolutely not." So yeah, Julia is special in that way, I guess.

I thought it'd be funny to take a closer look at what other words Judith had on her poster-board and maybe take a stab at scrambling up a few other potential names of our own. So shall we?

Words that I spot from the screenshots: The French Cook, French Way, Why, French Food at Last, Master, The, Art, French Cuisine, French Cooking, French Cook, an, Cooking, How to, American, Canary, French Camel, Murder, Rapist Goose (those last few were hard to make out, so I just took my best guess. I wonder if there's a Julie & Julia Blu-Ray out there where I could get a higher-res screenshot.)

So here's what I came up with by simply combining the words that Judith Jones already wrote down on her notecards:

Murdering The French Cook
How to Cook an American
Master Rapist Goose
Murder: The French Way
French Food at Last Canary
How to French a Camel
Cooking French Murder Art
I don't know about you, but I'm glad they went with what they did--Mastering the Art of French Cooking is a pretty fitting title for the cookbook of a generation.

But then again, The Art of Frenching Rapist Geese has a nice ring to it (Copyright pending, if I ever get around to writing my autobiography).

Julie & Julia Quote of the Day: "I especially want to talk to you about the title of the book."
Posted by Lawrence Dai at 10:56 PM