I started to talk about product placement in Julie & Julia a while ago... but then I sort of forgot about it. I guess that means it's doing its job? Anywho, today's super blatant case of product placement concerns our good corporate overlord friends at Pepsi.


This scene occurs pretty early on in the movie, as Julie Powell makes her trek to the subway. The ominous presence of the Pepsi sign really creates a sense of foreboding for Julie, especially given the wide shot and use of low-key lighting. The lack of illumination of the Pepsi logo is saying something poignant about about the commercialization of urban neighborhoods in contrast to let's say, the Vegas strip, for example.*

*This is something I might say if this was an actual film analysis blog.

I'm more of a Coke man myself (I'm sure that's going to come back to bite me in the ass in a job interview someday), but one cannot help but respect Pepsi's approach here. I mean, it's pretty obvious that they wanted to jam a gigantic fucking sign into this movie at some point, but still had the foresight to include some subtlety in their methods.

Like clearly, some super important ad exec was like "We can't just have the gigantic fucking sign be staring viewers in the face! That's way too obvious! It might inspire backlash. So here's what we do--we flip the sign so we're looking at it from the back. That way, people will see it and be like 'hmmm, I wonder what that says' and by the time they decipher it--BOOM! they will already have been advertised to!"

Simply genius. Whatever they're paying you, fictional Pepsi ad exec, it sure ain't enough. (Actually, it's probably enough. Leave some money for the Fanta people.)


I am onto your little game though, Pepsi. I know you think you know how I want to be advertised to, but you're terribly, terribly wrong. 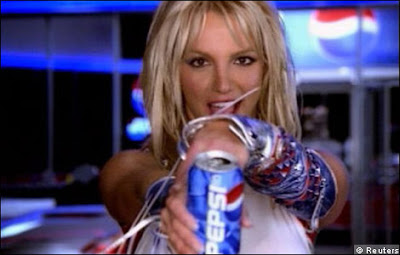 Dammit. Why am I so thirsty all of a sudden?

Julie & Julia Quote of the Day: "It's a veal chop with mushrooms in a bag."
Posted by Lawrence Dai at 10:15 PM