Avid readers of the Lawrence/Julie & Julia Project are no doubt familiar with the Julie & Julia erotica fan fic that I've been working on in my free time. And I'm sure most of you thought I was just kidding about that, so here's where I get to revel in telling you--I was not kidding.

A final plea: Please, don't judge me. I'm only giving the readers what they (secretly) want!

“Oh… my goodness,” she said, with the delightfully airy inflection that Paul had come to know all too well. “You have to taste this. Here.” As Julia shoveled a piece of the cod filet into to her husband’s mouth, Paul could only think of what else they’d be feeding each other in the hours to come. Julia struggled to put how she felt into words. 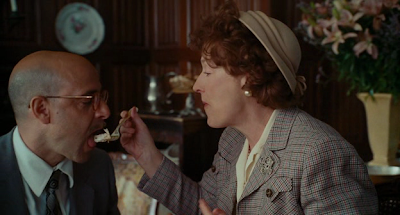 Julia crooned again. “Aaa-aa-aah… BUTTER!” The apartment shook with the roar of a caged lioness, separated from the cubs that she could never have. Paul climbed over his wife’s gigantic 8-foot frame and pressed his finger up against her lips. “Shhhhhh—ut up,” he whispered gently into her ear. They had been at this for almost five hours now. It was their first night in Paris and oh, how it was going to be a night to remember. “I’m going to butter your bread so hard tonight, baby,” Paul said, as he mounted his wife, preheating her oven to 400 degrees. He kissed her again, removed her dressings, and boned her like a duck—making a deep slit from the neck down, exposing her backbone in the process. “Oh, Paul!” she wailed, as he pulled her flesh this way and that.

Paul lifted one leg and swung himself off of her. He pulled out, his German sausage dripping wet with savory juices—Julia hadn’t skimped on the spices tonight. She moaned in disappointment, but Paul silenced her with a deep kiss, their tongues dancing around each other like sautéed mushrooms on a red-hot skillet (best when not crowded). 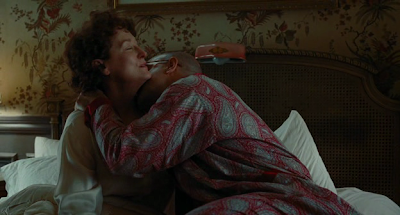 “You know how they say the quickest way to a man’s heart is through his stomach?” Julia asked. “Harrummfph,” Paul snorted in reply, exhausted from their passionate lovemaking and extensive foreplay, which involved every cured meat you could dream of. “Well, that’s bullshit,” she said. “The quickest way to a man’s heart is his through his stiff cock.” Julia picked up her husband with one arm, stood him up straight and reached down into the depths of his trousers, yanking on his limp cannelloni with a ferocity that could only be described as “Johnny Sparks-esque.”

The first hot spurt of olive oil hit her face, cooling immediately as it rolled down her chin.