Day 94 - So What Were Those Branches For Again?

I think I'm finally coming to terms with the fact that no matter how many times I watch this movie, there will always be loose ends that never get tied up. It's just a fact. I don't know why I've been in denial this whole time--it's as if I have to convince myself before every viewing that some of my unanswered questions about Julie & Julia will be addressed this time around. It's stupid, right? I guess I'm just going to have to live with the fact that I will never know what those fucking branches were for.


For those of you who have never seen the movie/forgotten everything about it, Julie Powell goes grocery shopping and for some inexplicable reason, buys this giantass thing of branches. Her voiceover narration reads as follows:


"I got carried away at Dean & DeLuca last night and spent half of my take-home pay. And the first thing I realized when I got to the subway with my groceries, bag of cat litter, a bottle of olive oil I absolutely could not live without, and a huge bunch of branches, was that the branches were probably not a good idea. They were slapping folks in the face right and left and I was sweating like a pig."

So okay, that's kind of a funny sight gag. Thorny branches + crowded subway = comedy gold. And I will even give the screenwriters credit for a nice little moment of character development there. The whole ordeal works to flesh out Julie's discombobulated personality and lack of foresight. Like, I get it--Julie is kind of a mess. This is a well-executed scene.

Except, wait--WHY THE FUCK IS SHE BUYING BRANCHES IN THE FIRST PLACE???

Somebody correct me if I'm wrong, but branches have absolutely nothing to do with anything else that's happened in the movie up to this point or anything else that happens afterwards. Due to the amount of time spent talking about them, I had assumed that the branches would serve as some sort of big plot point, but then they're immediately dropped as soon as they're introduced. I mean, there's a whole voiceover monologue dedicated to how burdensome these branches are! Surely, they will come into play at some point in Act III, when Not Mark Ruffalo uses them to save a child trapped down a well.


But no, that would make too much sense, especially for a tightly-plotted movie such as Julie & Julia. The branch subplot is soon abandoned and they are never to be seen again.

Hey, Lawrence--cut these guys some slack here. After all, maybe it's up to the audience to do the rest of the work. Maybe the fate of the branches is left ambiguous on purpose. You know, you decide for yourself what actually happened to them, like the end of Inception.

Maybe she used them for one of her recipes--that seems logical, right? I had just assumed up until this point that branches were some kind of obscure ingredient in French cooking.

So that settles that. No one will be eating up Julie's homemade Branch Bourguignon anytime soon. So she just bought a thing of branches for the hell of it. Decorative purposes or something. That's cool, Julie. That's cool.

Oh wait, nevermind--the branches do turn up again! Mystery solved! I know why she bought them now! 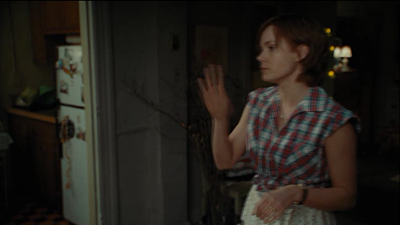 Julie & Julia Quote of the Day: "...the branches were probably not a good idea."
Posted by Lawrence Dai at 10:53 PM