So there's a scene in this movie I watched today that has always struck me as somewhat peculiar (I have seen it a few times already, but waited until today to comment on it). I'm talking about the brief moment when Judith Jones, editor at Alfred A Knopf Publishing, first lays eyes on the manuscript for Julia Child's soon-to-be-legendary cookbook. 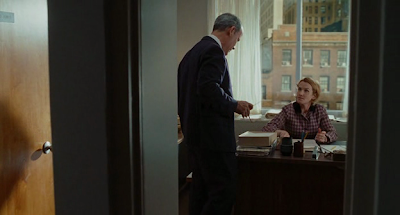 If you aren't familiar with the film, the interaction goes as follows:

Editor Man: Judith, would you take a look at this? Our intrepid literary scout, Avis DeVoto, is friends with some woman whose written a huge French cookbook. Houghton Mifflin just turned it down.

Judith Jones then sighs a deep sigh, as if having to read this book is going to be the worst fucking thing in the world, which to be fair, probably is for someone with her job. 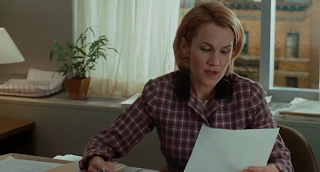 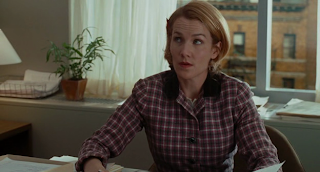 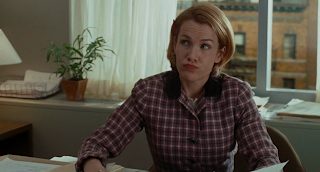 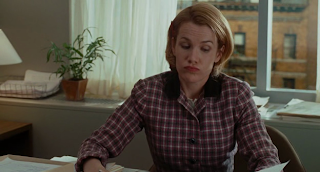 I mean, look at her facial expression--it's just screaming, "You want me... to read this?!?!? THIS PIECE OF SHIT?!?!" Clearly, this broad does not enjoy having to skim through giantass cookbooks written by randomass people. The title is "TERRIBLE" for Christssakes! From her point of view, this book is already trash and there's no chance that Knopf will want to publish it. She obviously does not want to be in this situation at all. That is, until she turns to the first page... 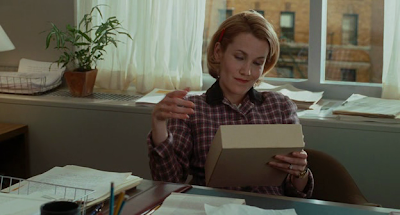 You see that little smirk? It's just a tiny movement of the upper lip, but it's quite noticeable. And is it...? Yes, yes, I think it is... That seed of a smirk is slowly getting bigger... it's growing... 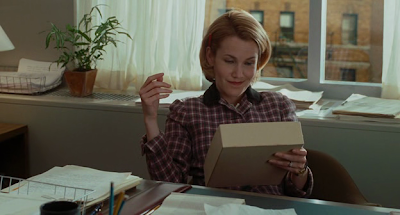 ...INTO A FULL-FLEDGED SMILE!!!
This is great, right? It's first inkling we get that Judith Jones is going to realize the sheer brilliance of Julia Child's life's work and share it with mankind, making the world a much brighter, safer place. And to her credit, Erin Dilly really sells this transformative mini-epiphany as Judith Jones.
Except one thing still bothers me--How can a table of contents be that good?!?
I mean seriously, Judith Jones looks at the title page, scoffs in disgust, turns to the very next page and all of a sudden, she's grinning like an idiot? I assume Julia Child has penned the most uplifting, hilarious, life-changing table of contents ever written, in order to get a seasoned vet like Judith Jones to smile like that. Which begs the question, "What the hell did she write?" How in the world did she make an incredibly boring, most skippable part of any book so great that made Ms. Jones completely re-evaluate her initial reaction of disgust in a matter of 5 seconds? I know Julia Child is good, but is she actually that good? Or is this just lazy filmmaking and a product of rushing the narrative?
I mean, "Chapter 1: Sauces" really isn't going to win anyone over.
Perhaps I am over-thinking this (which tends to happen when you watch the same movie every day). The simple explanation is that it was just Julia's "for the servantless American cook" line that got Judith. I mean, that would make sense. But then again, a part of me just wants to think Julia Child was capable of writing the most endearing, delightful and just flat-out best table of contents of all time.
And a quick reminder: tomorrow is your last chance to vote on Final Four matchups !!! Send your ballots to lawrenceandjulieandjulia@gmail.com
---------------------------------------------------------------------------------------------------------

Julie & Julia Quote of the Day: "We'll just take the book away from Houghton Mifflin and find another publisher."
Posted by Lawrence Dai at 11:02 PM