As most of you already know, tonight marks the 83rd Annual Academy Awards, the most exciting, least bloated, yearly celebration of Hollywood's finest. Tonight, we have the pleasure of honoring the best-looking and most talented people in the world. Now, while most people have been watching the pre-Oscars red carpet festivities, I've been dutifully watching Julie & Julia. With that in mind, I plan on taking a stab at liveblogging these here Oscars, evaluating the ceremony through a Julie & Julia-centric lens. You can go anywhere on the internet for live blog snark--but Julie & Julia live blog snark? You're in the right place, friend. So buckle up, everyone. We've got a long night ahead of us. 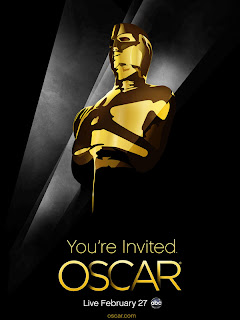 All times will be recorded in Central time (The best time zone ever!!)

6:41 - First Mark Ruffalo sighting on the red carpet. His wife, whose name is apparently Sunshine, looks stunning. How fitting--the man is married to fucking Sunshine! Ruffalo is up for Best Supporting Actor tonight for his role in The Kids Are Alright. Chris Messina a.k.a "Not Mark Ruffalo" is up for nothing.

7:37 - Cute montage of hosts James Franco and Anne Hathaway edited into most of the films nominated for best picture. I have seen 7 of the 10. Unfortunately, not one of them was Julie & Julia. Apparently, films from 2009 aren't eligible for Oscars this year.

7:40 - Franco and Hathaway are giving shout-outs to their parents/grandparents. If Julie Powell's mom was in the audience, she'd be a disembodied voice on the phone who acts like a huge bitch. Like mother, like daughter.

7:43 - Tom Hanks presents the award for Art Direction to Alice in Wonderland. Called it, motherfuckers, right here! That movie was terrible, by the way--would hate to see it every day for a year.

7:47 - Cinematography goes to Wally Pfister for Inception, which is pretty well-deserved. Roger Deakins was sort of robbed though. I bet he's feeling like a real Louisette Bertholle right now.

7:58 - Melissa Leo wins the Best Supporting Actress Oscar for her role in The Fighter. I feel bad for Amy "my sweet sister" Adams, but Leo kind of outshone her. You know, kind of how Meryl Streep outshone Adams in Julie & Julia. Also, Leo just said what I assume to be the phrase "fucking easy" in her speech. Fucking awesome.

8:07 - The biggest lock ever--Toy Story 3 for Best Animated Feature. My boy, Lee Unkrich is up there representin' the Pixar folk. God, I was bawling at the end of that movie. Julie & Julia makes my cry as well, just not in the same way.

8:13 - Aaron Sorkin and The Social Network pick up the adapted screenplay Oscar. When the Lawrence/Julie & Julia Project film goes into production, he's my first choice to pen the script. "The site got 2200 hits within two hours? 22. 22 hits."

8:24 - Anne Hathaway and James Franco are cross-dressing. Comical. Also, foreign language film goes to In a Better World. Cool. I have definitely seen that. Do you think the French parts of Julie & Julia would qualify for this category?

8:33 - The winner for Best Supporting Actor is not Mark Ruffalo. No, not Not Mark Ruffalo. Just not Mark Ruffalo. Christian Bale wins it. He was excellent in The Fighter, which also stars Amy Adams. The two had some pretty solid chemistry in the scenes they shared--Amy Adams could've made a passable Catwoman to Bale's Batman in an alternate universe. You know, a universe in which she didn't forever taint her career with her turn as the awful, awful Julie Powell. But I digress. It's nice to see Batman getting some Academy love. Gotta feel for the Ruff though. Next year, buddy--in the Julie & Julia remake.

8:39 - Man, that ABC-Oscar renewal contract plug was hilarious! And totally necessary! Not useless like all those tangential scenes in Julie & Julia.

8:43 - Alexandre Desplat, the composer for both The King's Speech and Julie & Julia, loses Best Score to Trent Reznor for The Social Network. Yeah, that's right, Desplat. You just lost to the guy from Nine Inch Nails. Fuck yeah!

8:47 - Inception wins Sound Mixing. If only these guys could mix the sound of Julie Powell's voice out of my head (bad joke, but hey, I don't got much to work with here!).

8:49 - Inception also takes Sound Editing. I predicted this on my Oscar ballot, so that's something. *insert joke at the expense of Julie & Julia's sound editors here*

8:56 - "That's gross." --Cate Blanchett. Do you know what else is gross? The Wolfman winning an academy award. Psssfth, makeup. Also, Alice in Wonderland winning the award for costume design. I mean, I guess those CGI costumes were well-rendered. Very high-definition images. Also, I wonder why the costumes in Julie & Julia weren't nominated last year. Oh yeah, that's right--because they sucked dick.

9:01 - "We Belong Together" tickles my fancy. Also, fuck the naysayers--Randy Newman is the man. He has his own salad dressing for God sakes! (Yes, I do realize that it is actually Paul who owns the salad dressing. But they're like brothers or something, right?)

9:13 - Strangers No More, motherfuckerssss!!! My Oscar ballot is looking real sharp right now. I just picked this one because it was in the middle. If you don't know the answer, always guess "c."

9:15 - Dammit, I picked the middle one again and lost for Best Live-Action Short. Fuck you, random chance.

9:17 - Auto-tuned versions of Harry Potter, Toy Story 3, The Social Network and Twilight. Kind of funny. Would definitely make Julie & Julia a lot more tolerable. Anyone have any thousand-dollar music producing software I could borrow?

9:20 - Fuck, too bad Banksy didn't win Best Documentary. I actually saw Exit Through the Gift Shop and it was kind of brilliant. I'm sure Inside Job was good, but I'd would've like to see what Banksy would've done with his speech. Also, this documentary detailing the behind-the-scenes life of Terry, the Julie & Julia cat, should have been nominated last year.

9:24 - I know Meryl Streep didn't make any movies last year, but still--where the fuck is she? That woman is a staple of the Oscars! Someone get her an invite, stat!

9:31 - Robert Downey Jr.'s killing his awards banter as usual. He and Jude Law did a planned bit about RDJ's storied past--risque. Inception wins Special Effects, obviously. Zero gravity fight scenes will win you Oscars. Somebody should have told Julie Powell this.

9:52 - Dead people montage. They should probably memorialize Meryl Streep's portrayal of Julia Child. You know, 'cuz she fucking KILLED IT.

10:02 - Kathryn Bigelow presents the Best Director Oscar to Tom Hooper for The King's Speech. Fucking bullshit. David Fincher deserved it 100x more. I know I should be making some kind of reference to Julie & Julia here, but I'm kind of pissed.

10:06 - Tom Hooper tells me to "listen to my mother." If I got movie ideas from my mom, I'd have to make Study Hard, Become Doctor President: The Motion Picture.

10:25 - In another no-brainer, Best Actor goes to Colin Firth of The King's Speech. After the directing win, its looking like a King's Sweep for the major awards. Dammit. C'mon Social Network! At least Colin Firth is a pretty likable dude--good acceptance speech, King.

10:32 - And... The King's Speech wins it all. I mean, it was a pretty good flick--impossible not to like. Good, inspiring performances. I don't know--just thought The Social Network was a little more ambitious. Plus, years from now, I'm going to remember movies like Inception, Toy Story 3, Black Swan and The Social Network before I even think about some British Oscar Bait (lovingly dubbed "James and the Giant King's Peach" by my buddy Jack).

Oh, and I'm going to remember Julie & Julia too (though I will try my best to bury those memories until they resurface years later in therapy).

Julie & Julia Quote of the Day: "Nothing is impossible."