So today, I was sitting in my 10:00 am Developmental Psychology class, listening to my professor talk about babies 'n shit--just your regular Wednesday morning, when I experienced something rather out of the ordinary. Transcendental even. And definitely a little bit scary. I had a severe Julie & Julia flashback.

Allow me to elaborate. We were like 20 minutes into class and I was half-paying attention to the lecture when my professor started a sentence with the word "typically." Now, 86 days ago, I wouldn't have given this another thought--people typically say the word "typically" pretty often. See what I did just then? Point proved. However, this time, it was different. Because right when the "-ly" bit rolled off my professor's tongue, my brain instantly heard the voice of Julia Child/Meryl Streep saying "Typique et charmant." 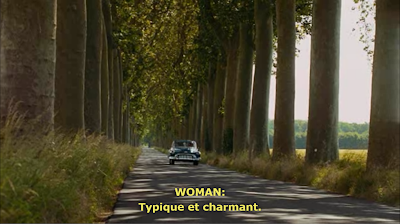 I don't know if it was the tone or inflection in which he said it, but something about that word, "typically," triggered this bizarre response in my brain. I basically just started to visualize and hear the opening scene of Julie & Julia--in my head.

I will do my best to describe it, but I'm not exactly sure how. I literally couldn't shut it off. Like, I was still in the psychology classroom, watching my professor gesture and move his mouth, but I could not hear anything aside from Meryl Streep and Stanley Tucci practicing bad French and talking about how great it was to live in Paris. I could also see them. Not like, ghostly apparitions or anything, but I actually saw them in my head, moving around, eating fish, being happy. It was fucked up.

Plus, that infernal theme music. Jesus Christ, the soundtrack! It was awful. I mean, it's been stuck in my head before, but this time it was just blaring--I couldn't hear anything else that was going on in real life. If someone had blown an air horn in my ear, I doubt I would've moved. And it went on for ten minutes.

And it's not like I was paralyzed or anything. I mean, I could move around in my seat. I just had nowhere to go. Just had to sit there in the middle of psych and experience the beginning of Julie & Julia.

So yeah, that was pretty weird.

Plus, I've had a headache all day long. Not to mention the fact that I had to go back to my dorm after class and actually watch the scene for real. Why did I sign up for this again?

Oh yeah, because I love the attention. And I love you guys, my readers. Worth all the therapy bills? Probably not. And speaking of therapy bills, I'd like to offer a gentle reminder that you can still donate to the Lawrence/Julie & Julia Project using the PayPal button on the lefthand sidebar. I may be slowly going insane, but I'm still well mentally to enough to solicit you all for money.

If you still don't feel obligated to give me your hard-earned cash, please allow me to guilt you into feeling charitable: tomorrow, Thursday, February 24, is my 20th birthday.