Helen Coxe is the lady on the left, obviously. In this scene, she is sitting at a boardroom table with Julia Child, Simone Beck, Avis De Voto and three other Houghton Mifflin executives, who are all are meeting about potentially publishing Julia's French cookbook. Coxe's character, Dorothy de Santillana, loves Julia's first draft, but is unable to convince her bosses to publish a giant set with multiple volumes. But I usually can't concentrate on what's going on plotwise, because I am almost always caught staring at Helen Coxe's gargantuan nose.

Now I'm not one to judge actresses based on their appearances, but Jesus Christ does this lady need a nosejob, stat. And don't get me wrong--I'm not endorsing the Hollywood culture of excessive cosmetic surgery, but that bigass honker of hers just seems hazardous to her health, not to mention to those around her. You could poke an eye out with that thing!


Seriously, check out that giant fucking schnozzola. It's too distracting! I can't watch this scene without tracking its every movement. Also, the Julie & Julia costume designers/make-up people don't do Ms. Coxe any favors by throwing those goofy-looking, horn-rimmed, thick black glasses on her face, which only accentuate how comically-sized her nose is. She seems like a perfectly capable actress. I just can't get over that nose--literally. Where is her face? I can't find it! 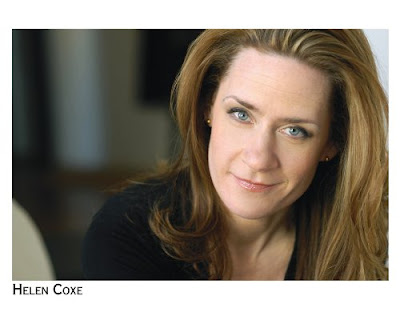 I did some extra snooping and found the photo shown above on her imdb page. She actually looks great! Maybe she should just stipulate in her acting contracts that she never be shot from the side. I mean, she could potentially be the next acting legend, but no one would know on account of that goddamned beak of hers.


I really don't intend for this post to be mean-spirited. I just think that someone should do her a favor and give her a rhinoplasty ASAP. Like, she really, really, really needs a nosejob. Mr. Coxe? Valetine's Day is coming up soon. Seems like a pretty romantic gift to me. Who am I kidding, there's no Mr. Coxe. Unless she's married to Pinocchio.

Ahhh, I am kind of a huge bully-douche. Sorry, Helen Coxe. I know that you didn't sign up for this. But then again, no one ever signs up for RANDOM ACTOR TUESDAY!

Julie & Julia Quote of the Day: "Now, you place the chicken on its stomach and cut along the backbone to the pope's nose, like so."
Posted by Lawrence Dai at 10:41 PM