Day 55 - The Greatest Rivalry in Football (and Julie & Julia)

Anyone who reads this blog semi-regularly knows that I am a big fan of professional football, especially THE GREEN BAY PACKERS, a.k.a. the greatest football team of all time. Today, the Pack faces the very scum of the Earth Chicago Bears in the NFC championship game, which will decide which team goes will go on to the Super Bowl in two weeks. Oh, yeah and the Bears-Packers rivalry is the oldest and one of the most heated rivalries in the NFL. In other words, I fucking HATE the bears.


And today at 3:00 pm ET, the Packers and the Bears will probably play the most important game in the history of this 181-game rivalry. Thankfully, I got my daily viewing of Julie & Julia out of the way this morning--can't have that looming over me while I try to enjoy what promises to be an instant classic.

That being said, I had to search for parallels between this game and Julie & Julia like I did with the Jets-Pats game way back when. After all, this is me we're talking about.

Aaron Rodgers/Paul Child: Now I know what you're thinking--A-Rod is clearly more of a Julia-Meryl Streep type. After all, he's incredibly talented, hard-working and has thrown an incredible 10 touchdown passes in 3 postseason appearances. But hear me out on this. Without Paul Child's constant presence and support, Julia Child would be nothing. She's said it herself. And without Aaron Rodgers, the Packers would not be the fucking juggernaut they have been in the last couple of weeks. Greg Jennings may sometimes have to put this team on his fucking back, but Rodger's is its core, its fearless leader, its bread to everyone's butter.

Jay Cutler/Not Mark Ruffalo: I know, I know. Cutler seems to be channeling Julie Powell most of the time. You know, because they are both HUGE FUCKING BITCHES. But I honestly think Not Mark Ruffalo represents Cutler the best. Not only is Not Mark Ruffalo also a sort of a bitch (whipped by JP, anyone?), but his inability to measure up to what people expect of him (to be Mark Ruffalo) makes him one of the most detestable people ever. Expectations for Cutler were high when he first went to Chicago last year, but then he fucking sucked. He's been marginally better this season, but the Bears' playoff run has been mostly due to their defense, which I have to admit, is really, really good. I just hope I can rely on Cutler to throw more picks in the redzone. 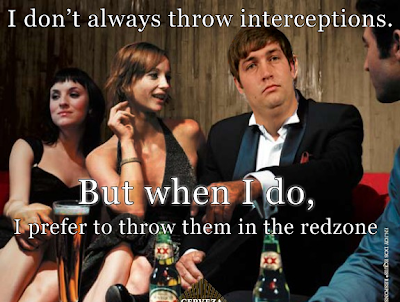 Clay Matthews/The semi-truck: I don't actually know if there is a semi-truck in Julie & Julia (even though I've seen it 55 times now), but if there is, then Clay Matthews is that semi-truck. Why? CUZ HE FUCKING RUNS PEOPLE OVER!!!


That's all the football parallels I can think of right now, but I'm sure I'll come up with more when the Pack heads to the SUPER BOWL in two weeks. Now, if you'll excuse me, I'm going to go defend this team to a room full of bears fans (the worst people on Earth). God, I hate going to school in Chicago.

Julie & Julia Quote of the Day: "Oh, god, you memorized it? How pathetic"