There are a lot of random actors in Julie & Julia. Only one of them is named Johnny Sparks.

How about JOHNNY FUCKING SPARKS??!?!?!


Sparks plays one of the "Interrogators" in the scene where the U.S. government brings Stanley Tucci (a.k.a. "Paul the Child molester") to Washington to ask him if he is a homosexual. The problem is that the movie only credits two actors as interrogators, whereas there are clearly three in the scene.


Through IMDB and process of elimination, I figured out that Jeff Talbot is the bald guy in the foreground to the left, leaving the identity of Johnny Sparks still unclear. Sparks' IMDB page does not help us out at all. There is no photo and his only other credited role is playing "Rich" in an episode of Law & Order. I'm pretty sure every actor alive has been on Law & Order at some point. So where does that leave us? Who are you, Johnny Sparks?


The middle guy is the only one of the three that actually has a line (he's the one that asks Tucci if he's a homosexual), so that's probably him. But personally, I like to think that Johnny Sparks is the actor on the far right, mostly because he has the head of an oompa loompa. 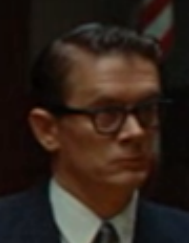 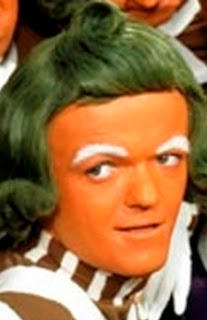 So there you have it. Johnny F. Sparks. A man of many faces. Interrogator in Julie & Julia. Rich in Law & Order. Beloved maker of candy in all of our lives.

Julie & Julia Quote of the Day: "Confronting the duck. You're my duck."
Posted by Lawrence Dai at 7:24 PM