Oh, Random Actor Tuesday--how I've missed you so. I want to personally apologize to all you of readers who were highly anticipating a RAT last week. Many of you were up in arms over my seeming neglect of this weekly feature and I assure you that I did not intend on disappointing anybody. It just so happened that I had decided to go see The Fighter last Tuesday so I thought a post about that would be more timely and pertinent. Plus, I just wasn't feeling it, alright? Don't you guys have better things to do than to monitor the self-imposed weekly post themes of an ironic Julie & Julia gimmick blog? Yeesh, get a life. And this is coming from the guy who watches a culinary chick flick every day. But alas, we move on.

Today's random actor is a man by the name of Roy William Gardner, credited with playing the incredibly important role of "Exhibit Guest" in Julie & Julia.


He only has four lines in the entire film, but god dammit, does he deliver them well (and with a confident foreign accent to boot). Basically, in this scene, Stanley Tucci's character, Paul Child, is hosting an art exhibition of some kind and Roy William Gardner goes up to him and says "Paul, Congratulations! Excellent exhibit." Very good character development stuff going on here. Roy William Gardner clearly doesn't fuck around.

And you know why? He has three names! Think about it. Everyone you know with three names is probably 10 times more legit than those two-named hacks down the street. To name a few: Daniel Day-Lewis, Martin Luther King Jr., Harriet Beecher Stowe, Lee Harvey Oswald, Jennifer Love Hewitt, Neil Patrick Harris, John Wilkes Booth (Two presidential assassins in one list? What are the odds?), Edgar Allan Poe, Sarah Jessica Parker and Mary Kate Olsen, among others.

So Roy William Gardner is great in Julie & Julia, but what else has he done? IMDB tells me that he played "Kissing Man" in Rebound, "Golfer (uncredited)" in The Nanny Diaries and "Ed's Bonesman (uncredited)" in The Good Shepard (I have no idea who Ed is, but I bet his bonesman is the real scene-stealer). So we know that this guy has a lot of experience playing characters with no names, which is truly a testament to his understated and even profound performance in this movie.

But hold on a second, it looks like.. yes, he does have a name! 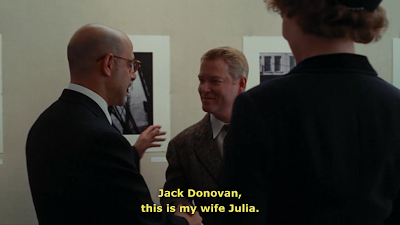 It's JACK DONOVAN!!! Stanley Tucci thanks him and calls him this after Roy William Gardner compliments the exhibit. So hooray for you, RWG! I don't have to bullshit this post any more--you finally landed a part that the screenwriters thought was important enough to give a name!

Too bad whoever was in charge of putting together the credits clearly didn't give a shit. Sorry, bud. Those are the breaks. At least you still have three names. That's one more than most people have (and two more than Cher!).

Julie & Julia Quote of the Day: "Thread the boned duck on a board, face skin side down."
Posted by Lawrence Dai at 7:09 PM