Day 9 - Are Lobsters Really That Hard to Cook?

I woke up this morning (read: afternoon) to the pleasant sound of one of my dorm mates pounding on my door, "Dude, you're on the Huffington Post!" Clearly, this asshole was just fucking with me. How in the world could my stupid little project get that kind of play on such a large stage? But then, as I logged onto my personal computing unit--there it was, staring me in the face: "7 Sites You Should be Wasting Time on Right Now--The Lawrence/Julie & Julia Project." Ladies, and gentlemen, I have arrived.

So a special thanks to whoever submitted my blog to the HuffPo people, and thanks to Arianna Huffington, who I'm sure personally goes through and approves every link on the site. And to you, my loyal readers, I thank you especially for being with me in these last 8 days. To those who have just discovered the blog, hop on the bandwagon--there's plenty of room for everyone. And as much as I enjoy sharing my soon-to-be-fleeting internet fame with all of you now, here's what you probably came for: your daily helping of Julie & Julia.

There is a scene about 40 minutes into Julie & Julia where Julie Powell has to cook a lobster recipe out of Julia Child's cookbook. For some reason, this is a huge fucking ordeal because lobsters are gross or something.

You can view the entire scene up on the youtubes here.

First of all, the lobster in the bag looks super, super fake. I'm guessing it was probably on loan from either the Jim Henson muppet factory or the Amanda Show. 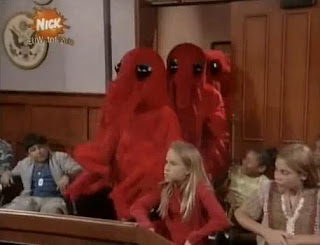 Even more ridiculous is the extent to which Amy Adams freaks out the entire time, as she can't seem to bring herself to end the life of a giant bug-eyed crustacean. Why did Nora Ephron make the narrative choice to make Julie sympathize with an uglyass crayfish? I have no idea. Maybe because that makes her more likable or something? I mean, I suppose it does give an excuse for Not Mark Ruffalo's character to sing the lyrics "lobster killer" to the tune of "Psycho Killer" by the Talking Heads. That was sort of funny, I guess. Oh, did I mention that this movie is 2 hours long and this scene contributes nothing to progress the overall storyline? Because I should've mentioned that.

By the time she actually puts the lobsters in the pot of boiling water, she seems to have have overcome her fear--only to have the lid blow up in an incredibly cartoonish manner--which naturally reduces her into a pile of blubbering uselessness as she runs away, leaving a trail of urine behind her.

1. Would a pot lid really fly up into the air like that, even if there was a lot steam pressure underneath it? I'm no chef or anything, but I feel like it would just bubble over or just pop a little. I mean this thing had about 3 feet of air. Pretty ludicrous.
2. Are they trying to suggest that the lobsters hit the lid in their dying breaths? Because that would just be absurd. At least try to be somewhat believable, movie.

Naturally, Not Mark Ruffalo, the man in Julie Powell's life, comes to the rescue and uses all of his masculine strength to re-lid the pot and make everything better. Wow, this movie is surprisingly sexist.

During this scene, I could not help but think of another infamous movie couple/lobster fiasco. I am, of course speaking about the Woody Allen masterpiece, Annie Hall. 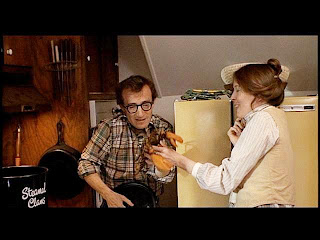 Again, you can view the infamous lobster scene is on the interwebs here. It's a great piece of moviemaking and helps establish the neuroticness of the relationship between Woody Allen and Diane Keaton. But the setup just seems strange to me--are there more instances of "couple attempts/fails to cook lobster" scenes in other films? Is this some kind of romantic comedy trope that I've missed out on or something? Put a man and a woman in a room with a lobster and boom, you have a good scene?

Also, are lobsters really that hard to cook in real life? A lot of questions for one post, I know. It just seems pretty straightforward to me. Obtain lobster from lobster store. Boil water. Put lobster in boiling water. Consume. I'll save that for a future blog post. I might have to get a girlfriend first, though.