I think its fair to say that what I've been through in these last few days is best described as misery--again, not to imply that Julie & Julia is a bad film, but I'm still trying to deal with the fact that 2 hours of my day has to be set aside doing this instead of, oh say--getting a girlfriend or studying for finals. I've even had to cut down the hours I spend playing scrabble on facebook. Sacrifices, I know. But enough bitching--onto the real work at hand.

Everybody knows that misery loves company. And I was lucky enough to have company during today's late evening screening of Julie & Julia. My good friend Kaitlin decided to drop in for a few hours and share in the viewing of the world's greatest movie. It's always nice to have a fresh perspective any time you see a film for the eighth time and tonight was no different. During one of the duller Julie Powell dinner scenes, Kaitlin lept up out of her seat and squealed in delight as she saw one of her favorite actors enter the frame--Eric Sheffer Stevens.

Don't be confused. I have no fucking clue who Eric Sheffer Stevens is either. His brief scene in Julie & Julia is pictured below. 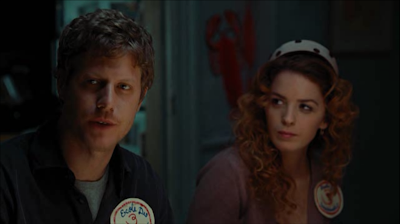 Not a familiar face? Kaitlin tells me that he played Dr. Reid Oliver in the infamous longest-running soap opera, As the World Turns. So that's something. Which brings us to the newest feature of the Lawrence/Julie & Julia Project: RANDOM ACTOR TUESDAYS!!!

From now on, every Tuesday's post will be dedicated to profiling every peripheral character in Julie & Julia and the actor who plays him/her.

Like I was saying, Eric Sheffer Stevens only has a bit part in this movie as some guy named "Tim." But curiously enough, no one never even says his name during his 30 seconds of screen time. In fact, Amy Adams hugs him and says "Hey, you," like even she didn't know who the fuck this guy was. Were it not for imdb, I wouldn't even know this character had a name.

Or maybe he doesn't need a name. After all, I tried to track his actions during the scene and all he does is high five Not Mark Ruffalo, give Amy Adams a cake, laughs once, and then says two lines, the only of any length being: "Why don't you put uhhh... a paypal thing on your website?" That's it. That's literally all he does. He just walks in, eats food, and plugs paypal. Is this some kind of product placement? Nothing ever comes of this paypal thing plotwise. There is not comical payoff involving the cake or the goofy high fives that he gives. His character is not necessary in the least. Why couldn't they have given his lines to Amy Adams' already established best friend character? (who happens to be there as well, not to mention that she already has a name) Why did they have to bring in this established soap opera star to say two lines and then disappear? 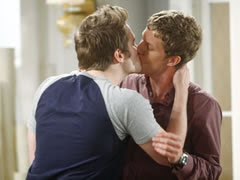 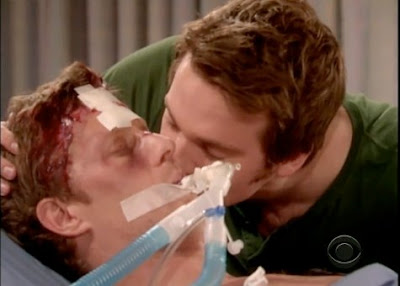 To win over the gay vote.

Apparently, Eric Sheffer Stevens played an openly homosexual neurosurgeon on As The World Turns and made out with other dudes pretty frequently. I investigated further by asking Kaitlin what his deal was. She responded that he was "the only reason why I watched the soap opera" and that "he commands every scene that he's in." She then started rambling on and on about how his character got hit by a train and donated his heart to a rival surgeon (I kid you not), along with other ridiculous plot contrivances and stupid character attributes. As I slowly began to tune her out, I knew I would have to look elsewhere for Stevens' biographical information.

Luckily, Wikipedia has a whole entry entitled "Random Facts" listed under his name:

4. Born Eric Stevens…took his wife’s last name when they married

6. Most of his background is in classical theater

10. Shakespeare character he would love to play: Hamlet Radio Interview, 7/26/10

The fact that this guy even has a "Random Facts" entry instantly makes him the man, but the facts themselves seem too good to be true. "Athletic build"--that's always important for actors, especially if they want to play athletes. "Blonde hair/blue eyes?" Aryan much? "Enjoys hiking and camping." Good to know. The man "builds bookshelves AND cabinetry!" What can't he do? Also, it's important to note that he would really like to play Hamlet sometime, in case any casting agents are reading this.

Chances that he wrote this all himself? Pretty high.

Oh, Eric Sheffer Stevens. Your career is pretty sad. Here's hoping that this role in Julie & Julia raised your profile and has since jumpstarted your film career. And if that doesn't work out, you'll always have the honor of being the first actor featured on RANDOM ACTOR TUESDAY!!!