I have watched Julie & Julia every day for an entire week now. Yes, that's right--seven days, seven viewings. Even I didn't think I could make it this far. 1 week down, 51 to go. Nearly there.

Naturally, having seen this movie 6 or 7 times more than the average person, I have begun to question my manhood a little. Not to say that Julie & Julia is exclusively a female film or anything--it's just that most of the screen-time is dedicated to two women cooking and crying and such. Don't get me wrong, the movie is great. But every so often, you just gotta watch a bunch of muscular dudes tackle each other (that sounded less gay in my head). 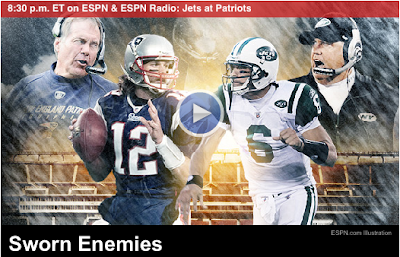 I am incredibly lucky that tonight's game--the game that was going to get me out of my estrogen-filled funk-- is the highly anticipated Jets-Patriots match-up. Billed as the "game of the year," the two 9-2 teams will be fighting for the AFC East crown and the best record in the NFL. It's a recipe for success. Legendary coach Bill Belichick. Legendary fat guy Rex Ryan. Two-time Super Bowl MVP Tom Brady. Two-time Best Smile winner Mark Sanchez. Hated division rivals. This promises to be one for the ages.

So why can't I get Julie & Julia out of my head? Granted, I just watched it earlier this afternoon, but this is football we're talking about! The manliest man thing a man can do.

Dammit, well maybe I can get it out of my system by noting the weird parallels between tonight's game and Julie & Julia.

Tom Brady/Julia Child: Both masters of their respective crafts, Tom (ht: 6' 4" wt: 225 lbs) and Julia (ht: 6' 2" wt: she won't tell) are perhaps the most flawless characters in the narratives of the NFL/Julie & Julia. Tom Brady is having another record season as the Patriot's quarterback and Julia Child has set multiple speed records for chopping onions, evidenced by a scene where she outchops a bunch of French chefs. The most glaring difference? While Brady has 3 super bowl rings to his name, Julia Child only has 2.

Mark Sanchez/Julie Powell: The underdogs of both fights, Sanchez and Powell have more in common than you would think. While Sanchez serves as the NFL's fresh-faced Hispanic golden boy, Powell is a representative of poor, disenfranchised bloggers everywhere. And though both Sanchez and Powell may not be the most talented at what they do, they manage to win games/book deals because of their supporting cast. After leading the Jets to an impressive playoff berth last season, Sanchez's accomplishments seem to eclipse Powell's at first. But to be fair, Julie has thrown much fewer interceptions throughout her career.

Bill Belichick/Paul Child: Both extremely supportive of their spouses, Brady and Julia, respectively, these two men of mystery know a thing or two about surveillance and espionage, whether it be on the sidelines of a football field or within the depths of the Chinese government.

Rex Ryan/Eric Powell: Always more than willing to eat the last piece of pie, these lovable scamps will always be devoted to their partners, no matter how bitchy they are.