Yesterday, I talked about "blackground actors," a phenomenon where the creators of a movie deliberately shoehorn black and non-white people into the background of unimportant scenes just for the sake of having diversity. Let me just say that I have no problem with non-white actors. I do, however, have a problem with racial tokenism--Nora Ephron, I'm looking at you.

I kept my eyes out for such instances during today's viewing and found a few within the first half hour. 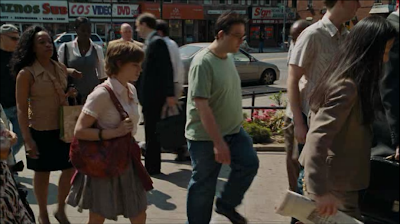 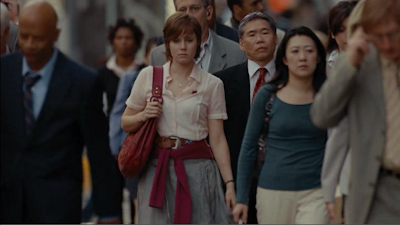 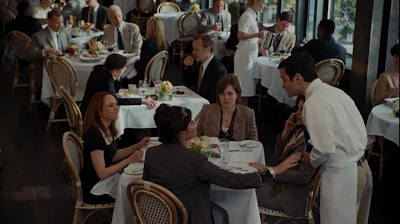 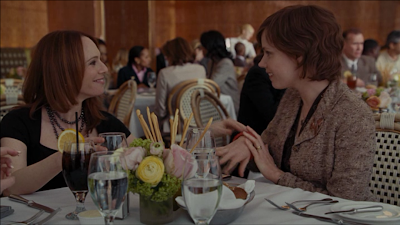 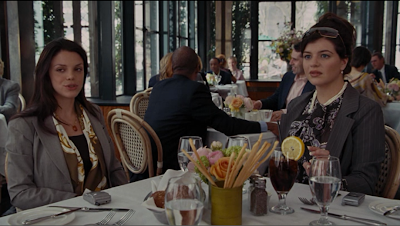 Maybe I'm completely off-base here, as this is supposed to be New York and there are definitely non-white people in New York, but for some reason, it just seems forced to me. It almost seems as if there's some kind of unspoken racial quota to meet and using non-white background actors is Julie & Julia's way of meeting it.

Which leads me to think, aside from actually crafting a fully-developed, strong non-white character, is there any way to amend this kind of thing? I mean, you can't just say "Hey, get rid of these black people in the background." But isn't it just as wrong to say "Hey, let's get more black people in the background?" Troublesome stuff. Does Julie & Julia actually hate black people or is this just a byproduct of Hollywood system? Are the pressures of being politically correct inadvertently making all movies of today racist? Is there anything lazier than using vague rhetorical questions to illustrate a point?

I don't know the answers to those questions. But I do know that Julie & Julia is fucking racist. And on that note, Happy New Year's Eve, everyone!

Julie & Julia Quote of the Day: "But that will give me something to do in Oslo."
Posted by Lawrence Dai at 4:49 PM